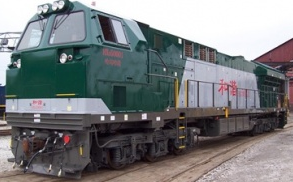 General Electric’s latest in a string of joint ventures with China is a plan to transition its manufacturing of train-based engine components to Beijing.

By the end of 2011, testing and re-building of components like turbochargers and power assemblies will take place in China. Starting in 2013, engines will be assembled, tested and rebuilt in Beijing as well. Providing these components keeps approximately 120 manufacturing jobs in the U.S., though jobs in the test and rebuilding phases will be performed in Beijing.

In October 2005, GE began its partnership with CSR Qishuyan by signing a contract with China’s Ministry of Railways. GE has supplied over 100 Evolution Series locomotives, of the 300 named in the contracts. The locomotives are more efficient than previous models, utilizing 6,250 HP turbo-diesel engines. The Evolution series is GEs most efficient model, much more so than the 6,000 or so diesel locomotives built by CSR to date.Also in the memorandum signed today was an effort to jointly advance high speed rail opportunities in the United States. To GE’s advantage, this team effort will allow them to compete effectively against European and Japanese firms with more experience in HSR construction. To date, only a handful of so-called “bullet” trains operate in the U.S., notably between New York City and Washington D.C. The Acela Express, Amtrak’s high speed train in the Northeast Corridor, peaks out at 150 mph but averages only 65 over its 456 mile course.

As the Wall Street Journal’s China Real Time Report says, “Whether it’s autos or high-speed train locomotives, China’s markets are the only ones in the world still growing strongly. That puts China’s industrial state planners… in the driving seat as the negotiate with companies from the U.S., Germany and Japan who come knocking at the door. The trade is market access for technology.”

Historically, this technology trade has its down side: As technology is doled out, manufacturing jobs disappear from the U.S. as other countries discover it is cheaper to build it themselves.