Last January, VentureBeat ran a story listing 30 electric car companies poised to make a splash over the next couple of years. That post went on to become one of the most popular in the history of this web site, racking up 189 comments.

Today, we bring you a redux of that article — but instead of a list of all of the companies with an EV in a works, here’s a rundown of 21 companies were strong and focused enough to make progress toward something realistic this year.

It’s worth noting that of this group, only two are producing interstate-worthy vehicles today: Tesla Motors, with its Roadster, and Venturi, with its Fetish. These models go for $109,000 and $400,000 respectively — not exactly what you would call practical.

2010 is certain to be a big year for the EV industry, with both the Nissan Leaf and Chevy Volt finally coming to market, or so they say. They will pave the way for another batch already set to launch in 2011 (including Tesla Motors’ hotly-anticipated Model S) and 2012 (namely, Toyota’s revamped Prius).

Without further ado, here are the 21 car companies that we believe will lead the approaching wave of clean transportation. Let’s start with the big boys, those coming out of established manufacturers with the production capacity and R&D budgets to change the game:

Nissan Leaf — A fully-electric vehicle, the Leaf travels just upwards of 100 miles on a single charge. Why is it special? It can be charged wirelessly — an industry first. For cell phones and PDA devices, wireless charging requires more power than plugging in. It’s unclear how Nissan has worked around this inefficiency, or if it has at all. Regardless, Leaf owners will be able to park their cars on special charging stations installed in their garages or elsewhere, and won’t need to touch a single cord or cable. This makes it the most hands-off vehicle yet.

Chevy Volt — This car is the best of the crop if you want to take a road trip. As a plug-in hybrid, it can travel 40 miles on a charge before its small gasoline generator kicks on and powers the electric motor. This allows it to go more than 300 miles without stopping. Most Americans don’t commute more than 40 miles though, so its feasible you could never need to use gas. Cadillac has showed off a higher-end version of the Volt called the Converj that uses the same power train.

Toyota Prius — This plug-in take on Toyota’s popular Prius model should be available to the general market by Q1 of 2013. The company isn’t rushing this one, and it doesn’t need to. It has had so much success with its current Prius and Highlander hybrids (dominating 75 percent of the hybrid market) that it’s still the frontrunning brand when it comes to green cars. The current plug-in prototypes reach a maximum speed of 62 miles per hour and can travel 12 miles on batteries alone. The real kicker: It can go 870 miles on a full tank of gas. That’s 134 miles per gallon.

Mitsubishi i-MiEV — To be launched first in Oregon, this car can travel up to 80 miles per hour on its lithium-ion battery packs. It takes about 12 to 14 hours to charge up when plugged into a standard wall socket. But if you happen to stop at a Coulomb Technologies ChargePoint charging station, offering higher voltage, it should take under a half an hour. Expect a range of about 100 miles. Mitsubishi has yet to release pricing information, but it’s slated to be a mid-market entry level vehicle.

BMW Mini-E — Looking an awful lot like the Mini Cooper, this fully-electric car is expected to rev up to freeway speed in just over 6 seconds, charge up in 4.5 hours and cost around $50,000. A two-seater, it will have the standard 100-mile range as well.

Now, here are the cars out of smaller, more experimental companies. Whether they are available to be driven today (if you can get your hands on one), or soon to be on the market for neighborhood driving or commercial fleets — this is the batch of companies devising truly disruptive ideas for the automotive market.

Tesla Motors Roadster — This is without a doubt the best known all-electric model in existence. Blazing fast, cranking it up to 60 miles per hour in 3.9 seconds, the Roadster can make it 313 miles on a single charge. The company is advertising a battery life of seven years, or 100,000 miles, and an average driving range of 244 miles, with a top speed of 120 miles per hour. (That top speed is electronically limited. Let us know if you find a way to hack this and determine the true limit on this beast.) The car can recharge on a standard outlet in 3.5 hours. Right now, it’s the only car on the market you can buy and drive home on the freeway without burning gas. But it’ll get some tough competition soon.

Fisker Automotive’s Karma — A plug-in hybrid like the Chevy Volt, the Karma is a step away from going into production. With the gas generator, you could drive it about 300 miles before needing to recharge or gas up. Delivery dates have been pushed around a few times now, but earlier this month, Fisker promised that it will roll into showrooms during the third quarter of 2010. It will have a top speed of 125 miles per hour and speed to 60 miles per hour in less than 6 seconds, which isn’t half bad for a luxury vehicle. The company is asking for a $5,000 deposit for the hard-top model, and $25,000 for the convertible. The sticker price is $87,900.

Venturi Fetish — A French supercar built in Monaco, it will reach 60 miles per hour in under 5 seconds and have an average driving range of 150 miles. It will max out at 100 miles per hour. But what really distinguishes it? It’s $400,000 price tag. It’s definitely a pretty car, but come on.

Myers Motors NMG — An acronym for No More Gas, the name is apt for this car. On three wheels, it can go 100 miles and up to 75 miles per hour. But it’s only slated to cost $27,000, making it one of the most affordable models in the green category. This isn’t bad for a commuter vehicle, but it still doesn’t have enough room for a weekly grocery trip, much less a family and all its trappings.

The Twike — A one-seater with three wheels, you’ll be able to pick one of these up for $35,000 when it’s released. It will take you almost to freeway speed, about 53 miles per hour, with a standard driving range of 100 miles. It charges at a rate of about 1 kilometer per minute via a standard outlet. That means it takes about 2 hours and 40 minutes to charge fully. The real trouble will be actually getting a Twike; the company has sold all the vehicles, it can make and has a waiting list.

Dynasty Electric — This brand actually covers five models of electric cars. The most consumer-friendly among them is its sedan, which looks a bit like the VW Bug from the front, and would be useful for making one short trip a day. Its top speed, 24 miles per hour, can be achieved in 10 seconds, and it has a maximum driving range of 30 miles. Right now it operates off of lead-acid batteries that charge in 6 to 8 hours.

GEM — A subsidiary of Chrysler, this company offers three plug-in models that all resemble golf carts. Appropriate for getting around your retirement community at a top speed of 25 miles per hour, it enjoys a maximum range of 30 miles and will retail for $8,000. It can be charged via a standard wall outlet in 6 to 8 hours.

ElBil Norge METRO Buddy — On sale in Norway, this car can go 75 miles per charge and accelerate to 30 miles per hour in 7 seconds. There are no known plans to bring the Buddy to U.S., where it would compete with several domestically-produced vehicles with similar performance standards.

Reva — Based in India, this company is technically the largest electric vehicle manufacturer worldwide. Selling a sporty Smart lookalike that can get you 100 miles down the road on a single charge, which takes 6 hours. It tops out at about 50 miles per hour. For now its only available in Europe, Chile and India. Reva already has a faster model slated for release in 2012.

Miles Electric Vehicles — Relying on lead-acid batteries, this company’s EV model is capable of running at 25 miles per hour for 40 to 50 miles. It takes 4 to 6 hours to charge, which isn’t bad for this class of vehicle. Price in the high teens, these cars are built in the U.S. and best suited for fleet-vehicle use.

Smith Electric Vehicles — This company has made news recently, tapping Valence Technology to provide batteries for its cars. Based in the U.K., Smith also has offices in Hong Kong, Missouri and the Netherlands. Smith builds fleet vehicles ranging from city-oriented vans to 12-ton capacity trucks. Its aerodynamic 12-ton van will carry a load up to 150 miles and accelerate to 30 miles per hour faster than most diesels, so it’s a good choice for urban fleet operations.

Modec — This company also makes models used best as fleet vehicles. The box truck gets up to 50 miles per hour with a maximum range of 100 miles and an “overnight” charge time. It might do well in an urban delivery role, though it doesn’t have the range for rural use. Modec is based in the U.K. but is also expanding on the European continent. The company has a U.S. dealership in California.

The Ford Transit BEV — This car is also planned for fleet use. Planning to release it sometime during 2010, Ford hasn’t offered up any hard numbers on its range or performance. The company is working with Azure Dynamics, which has recently decided on Johnson Controls-Saft as its battery supplier.

Aptera — The spacey-looking, three-wheeled Aptera 2e has been around for a couple of years now. Boasting superior aerodynamics and a range of somewhere around 100 miles, it is supposed to be released on the general market in 2010. It charges overnight via a standard wall outlet and can reach a highway speed in under 10 seconds (not all that impressive). Its top speed is 85 miles per hour. Most of the Aptera’s media coverage has focused on the company’s financial trouble, production delays and winnowing staff. If it makes it to market, the target price will be around $40,000. 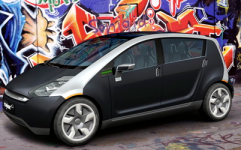 Th!nk City — If you stay in the right lane, you could (hopefully) take this car to work. Based in Norway, Th!nk has had a hard time with funding, causing release dates to keep getting pushed back. The design would allow the City to travel just over 100 miles, with a top speed of 62 miles per hour. The Th!nk will be made in Elkhart, Indiana with a targeted price of $20,000.

Persu Mobility — Formerly known as Venture Vehicles, Persu is working to release a three-wheeled hybrid. Right now, its prototype has an estimated top speed of 100 miles per hour and a mileage of 75 miles per gallon. It can travel purely on its electric motor for 20 miles.

Phoenix Motorcars — This company is working to make America’s obsession with SUVs and pickups greener. Both its SUT and SUV models get 100 miles before draining their batteries. An optional quick charger can get it to 95 percent power in under 10 minutes, but via a standard outlet, it will take 5 to 6 hours to reach full charge. Top speed is electronically limited to 95 miles per hour. Phoenix has had some trouble, though. In April, it entered bankruptcy and still declines to comment on when or if its vehicles will make it to market.