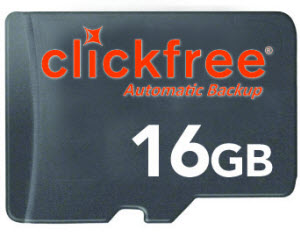 Under the Clickfree brand, Storage Appliance has created computer backup appliances that are very simple to use. Now it’s going a step further with a tiny memory card that can back up your entire laptop or other computers to your BlackBerry phone.

It’s pretty cool that you can now use such a tiny device for backups, and it means you can back up your data without weighing down your bags with anything extra.

The new Clickfree Traveler for BlackBerry is a micro-SD memory card with preinstalled backup software that lets you back up as much as 16 gigabytes of data. That’s enough to hold most of the data we keep on our laptops. That way, if something happens to your laptop while you’re on the road, you have a backup of the work you were doing while traveling. The data is encrypted and accessible via password. You just plug in your BlackBerry to a universal serial bus (USB) port on your computer and click to make the backup start.

You can also back up your data to a new SD card (in 16 or 32 gigabytes) that is being launched under the Clickfree name. You can back up multiple computers to one BlackBerry and use it for Windows or Macs. The BlackBerry device ships on April 5 for a to be determined price, while the SD cards ship in April.

These products show that even a startup like Storage Appliance can come up with cool technologies that the big rivals, Seagate and Western Digital, don’t have. Bryan McLeod, chief executive of Toronto-based Storage Appliance, credits the company’s singular focus on making software that renders hardware backups simple.

“We take a commoditized category, use software to simplify and solve an unfulfilled need,” McLeod said in an interview. 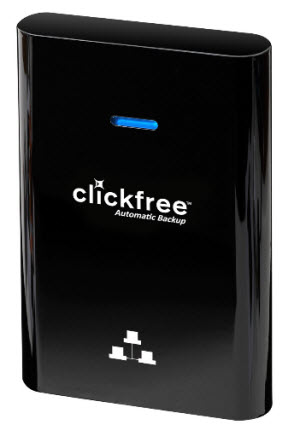 Another cool new device from Storage Appliance is the Clickfree C2N, which is the company’s first device that can operate over a network to automatically back up every computer that you have attached to the network. It uses a new BackupLink technology that lets people back up all of the computers on their network automatically, whether they are Macs or PCs or a mix. It comes in high gloss black and storage capacities of 250 gigabytes to 640 gigabytes. If you leave it attached to the network, it will continue to back up anything that changes. The company also has a similar network backup version for its Clickfree Transformer line of products that will ship in March.

The company already makes universal serial bus (USB) backup devices that you just plug into your computer in order to activate a backup. They’re available in a wide array of stores.

You don’t have to install any software. It just works. It’s also simple to restore data. I’ve used Clickfree to restore my data after a hard drive failed on a laptop. It can be a life saver. The company makes everything from wallet-size traveler’s backup devices to full hard drive backups.

The consumer backup market has grown more than 400 percent in the past couple of years, but more than 80 percent of home PC users still don’t do regular backups, said McLeod. Consumer storage is expected to grow six-fold to a terabyte from 2009 to 2013, according to Parks Associates. That’s because everybody is saving a lot of video, photos and music. McLeod thinks that most people aren’t doing backups now — perhaps 85 percent of computer users — because of something he calls “fearcrastination.” They procrastinate because they’re fearful about how to do it. If it was simple enough, they would back up their vacation photos and other data in a heartbeat.

Storage Appliance was founded in 2005 and raised $10 million last May. Investors include Jefferson & Partners. The company has 100 employees in Toronto and Beijing, and it has 26 patent applications pending. McLeod said the company manages to breakeven results and is on the verge of profitability. McLeod said that the company plans to release several products a quarter in 2010.