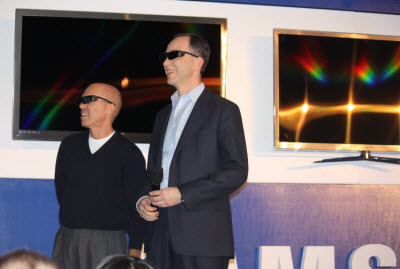 Jeffrey Katzenberg, chief executive of DreamWorks Animation, took the stage to tout the alliance and Samsung’s own commitment to 3-D. Tim Baxter, president of Samsung Electronics America, said that Samsung will launch a series of 3-D TVs based on LED, LCD, and plasma technology.

Samsung created the first DLP, rear-projection-based 3-D TV set in 2007. It created a plasma version in 2008, and now believes the time has come to roll it out across a large number of TVs. The company is also rolling out 3-D Blu-ray players, camcorders, glasses and home theater equipment. As with Toshiba, Samsung alsohas a technology to convert 2-D videos to 3-D on the fly, so the content doesn’t have to be natively created in 3-D to be viewed in 3-D. Still, Katzenberg said that DreamWorks was creating a version of Monsters vs. Aliens to run on Samsung TVs. 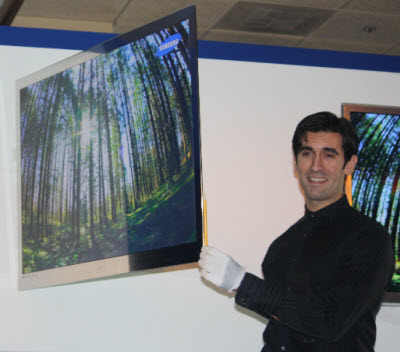 One of the new 3-D TVs is as thin as a pencil, or 12 millimeters thick — a third of an inch. That’s only slightly bigger than LG’s 6.9-millimeter TV announced today.

Samsung is also partnering with Technicolor, the pioneer of color TV and an innovator in 3-D TV.