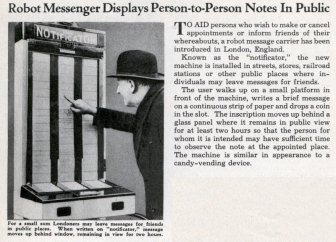 Fostering a sense of local community in the age of the Internet and globalization is no easy task.

A new venture called BlockChalk from the former product lead of del.ici.ous Stephen Hood and Dave Baggeroer of Stanford’s Institute of Design, is trying to tackle that problem. BlockChalk is a service that lets people use their phones to leave short text messages for others in the neighborhood without compromising their privacy. You can leave opinions about local businesses, set up deals with other neighbors or even report a lost cat. With the app, you can look up a specific location and see messages that other BlockChalk users have left there like this recommendation for a New York bar. Hood says it’s already available in 10,000 neighborhoods and 6,600 cities.

Today they’ve launched an iPhone app so you can keep track of short notes or the latest “chalks” in your neighborhood. The company already has a HTML5 web app that works with the iPhone and Android-based phones and an app for the Palm Pre and Pixi.

The criticism that the pair have for existing location-based services is that they work for early adopters who have lower expectations of privacy, but they may not be so readily accepted by more guarded users. Anonymity, of course, raises other issues. How do you seed a social networking service without real or tangible relationships built-in? How can people be engaged if there’s no context for the others they’re interacting with? That said, there are anonymous community sites that have thrived, like Craigslist.

We’ve seen other attempts at building information services for local communities. EveryBlock, which was acquired by MSNBC, just launched a ‘Notify Your Neighbors’ function yesterday to let regular people share updates about what’s happening on their block. ‘Neighborhoods’ was another early Facebook application launched in 2007 that had an intriguing concept because it was tied to real identities and places through the social network. But it only has a little over 8,000 monthly active users. Then, of course, there’s the grand-daddy of them all, Craigslist, which does have a mobile web site. 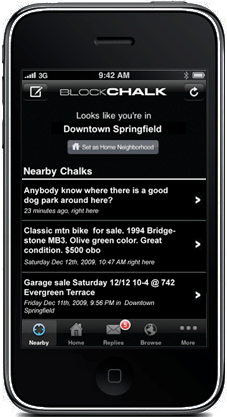