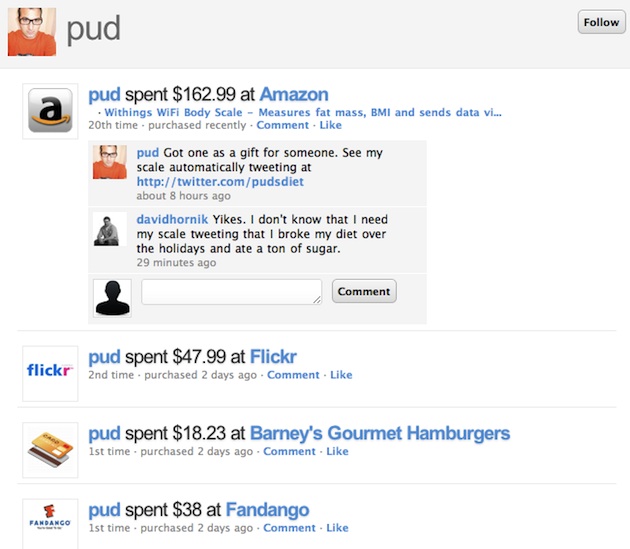 Most appropriately, given the occasional media description of Blippy as a Twitter for your credit card, Twitter co-founder and CEO Evan Williams also participated in the funding.

The big idea behind the Palo Alto, Calif. startup is that a lot of the data from your credit card can be used socially. Whenever you make a purchase with the credit card that you’ve linked to the Blippy site, it shows up in your profile, so people following you can see, for example, that you bought a movie ticket from Fandango. Co-founder Philip Kaplan (who previously founded the F***ed Company blog and ad network AdBrite) said it wasn’t that hard to convince Blippy’s investors to come on board, since several of them (including Williams and Sequoia’s Roelof Botha) were already avid users of the site. Assuming Blippy takes off, there are a lot of business opportunities around the social aspect of the platform and the data it’s collecting.

Since Blippy launched its private test in December, 5,000 people have tried it out, sharing information about an estimated $5 million worth of purchases. Now, Kaplan said he and his co-founders Ashvin Kumar and Chris Estreich are confident they’ve worked out the major bugs and put most of the basic features in place, so Blippy is open to the general public. Anyone can visit the site to either share their credit card purchase information, or to just see what other users are sharing.

The Blippy team might also release an API that allows developers to incorporate Blippy data into other applications.