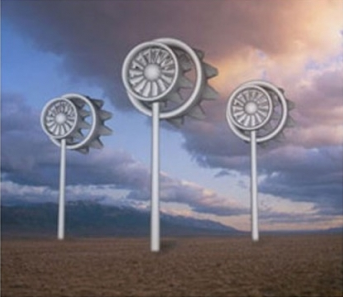 Since 1990, FloDesign has been making aerospace and jet propulsion equipment. It is now bringing this experience to the design and manufacture of wind turbines under the banner of FloDesign Wind Turbine, and has raised $34.5 million (PDF) to do make its novel idea a reality.

The news is significant for two reasons. First, it has recruited a top-tier crop of investors, including Kleiner Perkins Caufield & Byers (going in for a second round), Goldman Sachs and VantagePoint Venture Partners, as well as Technology Partners. These guys don’t invest in just anyone, and are making ever more prudent decisions in the cleantech sector as it expands. Second, FloDesign’s turbine is a fresh take on a tired concept: it looks and acts like a jet engine.

The company decided on this structure (referred to as “shrouded” because the blades are encased), not only because the bulk of its expertise lies in aerospace production, but because it has proved to be three to four times more efficient than traditional open-fan turbines.

Still officially in stealth mode, FloDesign says it is firmly in the research and development phase of its business plan. But its core idea is that if each turbine can generate more energy with smaller blades and shorter towers, then less material will be needed and the costs of building big wind farms will go down. Basically, if the company ever decides to license its technology to big wind power contractors, it could make a lot of money.

Roughly, here’s how its technology works: The FloDesign turbines force air through a small hole, causing it to gain speed and create a pressure differential, thus drawing more air into its double rings of turning blades. With this being the case, one turbine is able to do the work of up to four of its three-bladed cousins. Here’s a video (originally posted by CNet) showing how the design works in real life:

FloDesign isn’t the only wind power company moving away from the three-blade model. Nordic Windpower, the Berkeley, Calif.-based enterprise that just nabbed $12.1 million, partially from Vinod Khosla, earlier this month, offers a two-blade turbine. Its lead product is now said to be quieter and more reliable for longer periods of time, requiring less maintenance and lower costs.

Previous to this first round of funding, FloDesign received an $8.3 million grant from the U.S. Department of Energy’s Advanced Research Projects Agency – Energy, or ARPA-E, program for experimental clean energy technology.