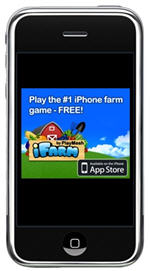 There are, right now, basically two kinds of ads that you can buy to run on smartphones: Branding or performance. Branding ads are meant only to show big-spending phone owners your brand name with some sort of message about it. You pay for each time the ad is shown on someone’s phone.

Performance ads are meant to drive sales. The current pricing model is usually what’s called cost per click (CPC) or pay per click (PPC). With these ads, you pay for whenever someone clicks on an ad to navigate through to the site for your for-sale product.

Now, imagine you’re an app developer. It’s not enough that people click through to your landing page. You want them to download an app, which is how you get paid. Do you want to pay for every click? No, you want to pay only when someone downloads your app. Otherwise, the ad has failed you. If you spend $10,000 on ads served to people who don’t actually buy apps, you’ve thrown your budget away.

Mobile ad network Greystripe launched a new (for them) type of ad option in November aimed at developers: Pay per download — PPD in ad-speak. Developers can decide how many downloads they want to pay for at 99 cents each. Greystripe guarantees they’ll only pay 99 cents for each download driven by a Greystripe-served ad.

This morning, Greystripe announced that for the 200 developers they signed up — including game maker PlayMesh — the program delivered every single 99-cent download that developers paid for.

PlayMesh founder Charles Ju, in a prepared statement for Greystripe, said that the company’s iFarm game received a 56% conversion rate on clicks and generated more than 60,000 downloads with the 99 cent download program. It drove iFarm to the Number 1 spot in the iPhone’s free app rankings. “After signing up for Greystripe’s 99 cent download program,” Ju said, “we noticed the conversion rates on iFarm increase almost immediately.”

Why PlayMesh paid for downloads of a free app is a story for another time.

Greystripe, a San Francisco company founded in 2006, has raised $17.6 million in four rounds of investing, most recently $2 million from Peacock Equity in September 2009.