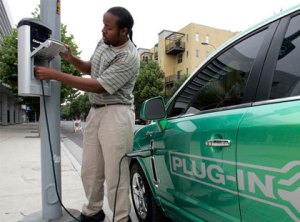 Companies working on ideas for charging and fueling green cars have been on a roll lately. The streak kicked off last Sunday with Better Place landing $350 million in equity, and continued with SunHydro touting plans to dot east coast highways with hydrogen fueling stations. Now Coulomb Technologies, provider of electric charging stations for plug-in vehicles, has gotten its turn, raising $14 million in a second round of venture funding.

All of these companies have been working out of the limelight for a while now — infrastructure isn’t as sexy as the cars themselves. Coulomb has quietly been installing its ChargePoint Networked Charging Stations one city at a time in North America and Europe. These machines, small enough to be bolted to a roadside street lamp, pump up to 240 volts of AC power or 500 volts of DC power, juicing up drivers’ batteries quickly while they’re on the go — all they have to do is swipe a ChargePoint card, just like a debit card.

But Coulomb says 2010 will be its breakout year, with plans to roll out thousands of new stations across many cities, and to establish footholds in Asia and South America. The recent funding, led by Voyager Capital and Rho Ventures, and including Siemens Venture Capital and Hartford Ventures, should give it the boost it needs to make this happen.

In addition to installing stations in one municipality at a time, the Campbell, Calif., company is also forging partnerships with companies who will make the technology available in their parking lots. Perhaps the biggest boon in this area was the deal with McDonalds to make charging stations accessible for fast food diners with plug-in vehicles. The company also counts Dell, Reliant Energy, DTE Energy and Element Hotels among its strategic partners. In all, it provides charging stations to 120 clients, including cities.

The funding is yet another sign that electric vehicle infrastructure is finally attracting the attention it deserves. For a while, EV makers and enthusiasts alike have been wondering how wide adoption of these cars will occur without the necessary charging and fueling infrastructure already existing in the field. Last year, Coulomb snagged $3.8 million in a first round of funding. The fact that its latest fund-raise tripled this amount is an extremely positive indicator of investor interest.

Now that infrastructure companies are starting to get the resources they need, it will be interesting to watch how competition between them plays out. Better Place, which is also pursuing a similar charging station concept, has focused a lot recently on battery-switching stations, where drivers could swap out depleted batteries for fully-charged models at designated points. This solution is intended to address charging wait times, which could still exceed a half hour with Coulomb’s stations. No would one want to wait a half hour at a gas station, is the thinking.

There is also hydrogen fuel cells to consider. With Toyota, Daimler, General Motors and Honda all working on hydrogen-powered cars, these models could present formidable competition for EVs. SunHydro, a startup planning to use solar energy to generate the hydrogen for fueling stations, seems to have a feasible, affordable plan. How much of the market will it carve out?