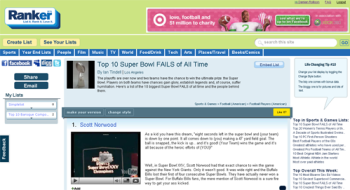 Up-and-coming list aggregator Ranker.com is announcing another $750,000 in seed financing, part of a planned $1 million second round. The first $1 million came from company founder Clark Benson, who sold eCrush to Hearst Media in 2006. The second round is led by Siemer Venture Capital and includes a group of angels affiliated with eCrush.

Ranker began in 2008 with Benson’s initial capital investment, and launched a beta site in August 2009. The company claims it is exceeding 150,000 monthly page views [correction: that’s 150,000 monthly visitors] as of January 2010.

It certainly appears to have a ton of content already, although as you dig in to the details, you discover that some of that is sourced from other places like the Information Please Database, or credited to not-very-believable usernames like Reference and Web Infoguy.

Still, there’s evidence of a real live user base and for some the site appears to have caught on. I’ve seen Ranker described as a blogging site for people who like to make lists, and that seems pretty accurate. You can find or create lists in a wide variety of categories like People, Music, TV, Food/Drink, Tech, Books/Comics, and so on. Each of those categories has a database behind it of common list items, and users can drag and drop items into a new list rather than typing. You can also add images and YouTube videos to your lists.

Perusing several examples, I get the impression that the site attracts people who like to share tips and arcane knowledge: “Best electronic companies to get free parts from”; “Top celebrities that play World of Warcraft”; “Bands that will get you into a hipster’s pants.”

There are a few similar sites out there, like Listverse and TopTenz.net, but these are curated sites not purely driven by user-generated content. Ranker’s got a distinctive spin on its hands and may well be able to parlay that into a popular phenomenon. The site has a few little bugs and formatting problems here and there, but this new financing round is said to be for more developers, so that should help. Ranker’s FAQ also promises near-term expansion of the site’s social networking features.

Benson’s former company eCrush is behind eSpin, the social networking site for teens. Launched way back in 1999, before Friendster and MySpace, eCrush was one of the earliest forays into social networking. Hearst bought eCrush for an undisclosed amount, rumored to be in the range of $8 to $12 million.