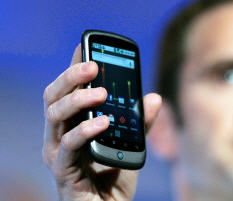 With the Nexus One, Google made voice commands an integral part of the phone’s user interface. In addition to voice searching — a feature on all Android phones — Nexus One users can also dictate e-mails, SMS messages, and use voice commands in Google Maps.

Now the Times Online is reporting that Google is seeking to take the next step with mobile voice. The company is developing software that will allow near-instant language translation on mobile phones. The technology would be a combination of Google’s text translation service and their mobile voice work.

Google’s head of translation services, Franz Och, is confident that we will see the technology in the near-future:

We think speech-to-speech translation should be possible and work reasonably well in a few years’ time.

Google expects the translation software to get better the more you use it. It also has access to a wealth of translation information from its online services, which puts the company in a better spot than potential voice-translation competitors.

I’d expect the initial voice translation offerings to be fairly crude. But as voice recognition technology improves to the point where we computers can accurately interpret major languages (and their many regional accents), it has the potential to be something straight out of science-fiction. Like the Times mentions, it’s not unlike the Babel Fish from the Hitchhiker’s Guide’s to the Galaxy.

It’s strange to consider how little we actually use speech in smartphones these days, aside from the occasional voice call. With mobile voice translation, along with the fact that the Nexus One’s voice commands will surely spread to other Android phones soon, Google is looking to remind us just how useful speaking into smartphones can be.