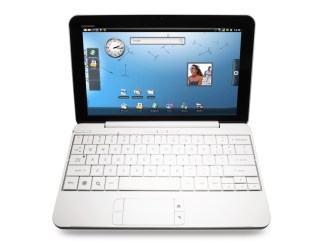 Hewlett-Packard has announced that its Compaq division will launch a netbook that uses the same basic Android operating system as Motorola’s Droid phones and Google’s Nexus One.

The Compaq AirLife 100 is a cloud-white netbook that HP will sell exclusively through Telefónica in Europe and Latin America this spring.

Gizmodo writer Jesus Diaz describes it as “an iPad for the Apple haters.”

The interface features a new touch-based tabbed browser, a touch-based way to zoom web pages, and a touch-optimized media apps and shortcut menu.

HP’s announcement is timed to the start of Mobile World Congress, a major cellphone conference in Barcelona on Monday. As for where the AirLife will be available, an HP spokesman emailed me, “It will be southern Europe and Latin America to start with. We will announce country availability at launch by Telefonica.”