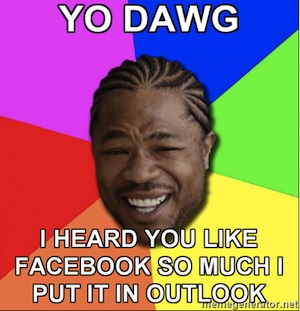 Microsoft announced a lot of progress today with its Outlook Social Connector, which brings social network data to the inboxes of people who use the popular email program. Outlook’s integration with LinkedIn, which was launched November, is now live as a public beta test, and Microsoft says it has also struck deals for similar integration with Facebook and MySpace.

Broadly outlined, Outlook Social Connector might sound similar to Google Buzz, the Gmail-based social networking tool that Google unveiled last week. After all, the catchphrase that was occasionally applied to Google Buzz (“Facebook in your inbox!”) is literally true for the social connector. And yes, both reflect attempts to bring social networking features to email.

But the purpose and implementation sound quite different. With Buzz, Google wanted to make it easy to share content from within Gmail, so a lot of the initial setup was automated, which played a large role in the backlash over privacy concerns. (Google has since adjusted the setup process to address those complaints.) Microsoft’s social connector, on the other hand, allows users only to see relevant social data within Outlook, so you’re using it to view information, not publish it. Plus you’ll need to install a bunch of plugins to make it work, so I doubt many users will be taken by surprise as they were by Buzz.

With Outlook’s LinkedIn connector, for example, when you look at an email from a LinkedIn contact, you can see their most recent updates on the professional network, giving you context for your message. You can also see their contact information, which should help you avoid sending messages to outdated email addresses. And if you’re not connected with them on LinkedIn, you can send them an invite straight from your email program.

This also sounds similar to the features offered by email startup Xobni. Back when Microsoft’s social connector was announced, Xobni published a blog post saying that it has been working closely with the computing giant, and that it will be adding new features that go above and beyond what’s included in the Outlook Social Connector.

Microsoft’s blog post doesn’t include any details about how the Facebook and MySpace integration will work, or when these services will be available, saying only, “Keep watching the Outlook team blog for availability.”

[image via Memegenerator and Valleywag]