Social networking, on a scale as large as Twitter and Facebook, is great for connecting with people and finding information. It’s not very good for finding people with common interests, and talking about those interests.

That’s why, even with the big players dominating, sites like Ning have found success by letting people create intentionally small social networks, usually designed for people with a common interest –- Twilight books, ska music, microbrew beer, or anything else you could possibly imagine. ShoutEm is a relatively new player in that market, and has just left beta testing, globally launching their new tools designed to make creating mobile social networks even easier.

The new products are mobile applications –- apps for the iPhone and Blackberry OS are out, and an Android app is in the pipeline. With these apps, users will be able to see the latest from their network, as well as upload pictures, send SMS text messages, and more to keep their network up to date. Networks have also been redesigned to function better on mobile phones, making the process even more pleasing for users. 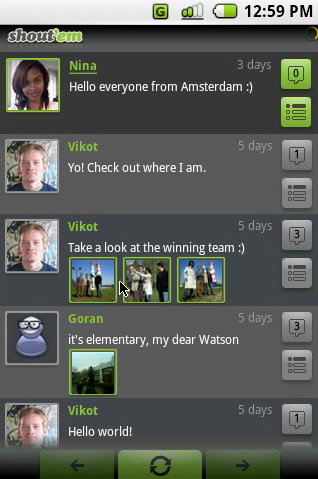 With ShoutEm, anyone can create a social network with no know-how whatsoever. There are some design tools, a number of functionality options, and a vast number of ways to customize the network to fit your needs –- whether you want a way for your family to connect from far away, a fan club for your favorite sports team, or a place to discuss things happening in your city or town, ShoutEm’s app can cover it.

The privacy settings are one of the key features to ShoutEm, and one of the things that ensure that the networks stay true to their purpose. Network owners can restrict members to a particular email domain, make it invite-only, make certain parts private, or open the whole network to the world. There’s support for custom domains, and even embedded advertising – ShoutEm is trying to hit everyone from businesses looking for an internal network, to fan clubs and community groups.

The application is much more fully-featured than Twitter, which means it likely won’t get the same rate of adoption –- there’s just a lot to do in order to get started. What it does well, though, is create a simple platform for a lot of small networks, giving people of like mind an easy way to find each other -– something neither Twitter nor Facebook does a particularly good job with.

Shoutem is part of Croatia-based Five Minutes Group, which has been building social networking and Web 2.0 services since 2006. The 25-person company is from Zagreb, Croatia, and is funded by its founders, along with seed investment from the Croatian government.