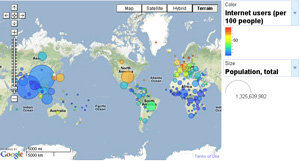 Google’s motion charts show trends in two ways not possible with motionless plots. First, the motion feature removes the requirement to use a chart’s X axis to represent time. X and Y coordinates can represent any two variables — say, unemployment versus gross domestic product — and change over time can be shown by animating the chart.

Second, by animating the chart, Public Data Explorer can trigger pattern recognition in human minds that wouldn’t have happened had the chart stood still.

Google’s blog post explains the basics, but there’s nothing like a live demo to show the power of motion charts. The ten embedded below are loaded in real-time from Google.

The initial set of thirteen databases were provided to Google by the World Bank, the Centers for Disease Control, the U.S. Census Bureau, the Bureau of Labor Statistics, Bureau of Economic Analysis, Eurostat and the Organisation for Economic Co-operation and Development (OECD).

For now, you need to use the same data set to provide the numbers for both X and Y axes of a chart. In the future, you’ll be able to compare data from completely separate sources, opening up the potential for new correlations to appear onscreen.

These are the datasets available today:

Google’s motion charts will be immediately familiar to people who saw an earlier version in a video of a presentation at the 2006 TED conference by researcher Hans Rosling. He dazzled jaded TED attendees with an 18-minute presentation of animated charts on global life expectancies and their correlations with global wealth. Roslings moving graphs debunked, he said, the presumption that there is a gap between rich and poor nations today. Instead, Rosling showed how most of the world’s population has gravitated into a middle ground over the past 40 years.

The chart technology was conceived by Rosling’s son, Ola, and his wife Anna Ronnlund. The two had studied the arts rather than science in college. After Ola’s father complained over dinner in 1998 that his students at Sweden’s Sweden’s Karolinska Institute didn’t have a fact-based worldview, Ola and Anna eventually brainstormed the idea of making the elder Rosling’s bubble charts of global wealth versus child mortality into a single animation — a chart that would play over time to show emerging and evolving trends.

Eventually, Ola and Anna dubbed their tech and formed a company to develop their motion-chart idea with funding from the Swedish international aid agency Sida. Over the next couple of years they learned of the heavy demand for this kind of visual exploration tool among public agencies around the world.

At the same time they began to ve invited to tech conferences in American, where they met early personal computer visionary Alan Kay. They asked if he could help find someone who could take over this idea and develop it further. Kay gave them the ugly truth: It very unlikely, he said. They would probably have to develop it themselves. That’s how it works with most innovations.

In 2005, Anna and Ola founded the Gapminder foundation together with Hans. With his ever-more-powerful visualizations, using the technology now named Trendalyzer, Dr. Rosling was invited to more and more prestigious conferences. Eventually, he met the Google founders Sergey Brin and Larry Page at the World Economic Forum in Davos. Hans was also invited to TED in 2006. His presentation, widely viewed online, got him invited to give an internal presentation at Google’s Tech Talk series. He insisted that the inventors, Anna and Ola and software engineer Johan Nystrand, give the preso instead.

You can guess how the story ends: Google acquired the Trendalyzer software from the Gapminder foundation, which still operates in parallel. Anna, Ola and three others from Gapminder were hired by Google in early 2007.  Google’s motion charts have been available in Google Docs since November 2008,  along with an API to invoke chart tools from other sites.