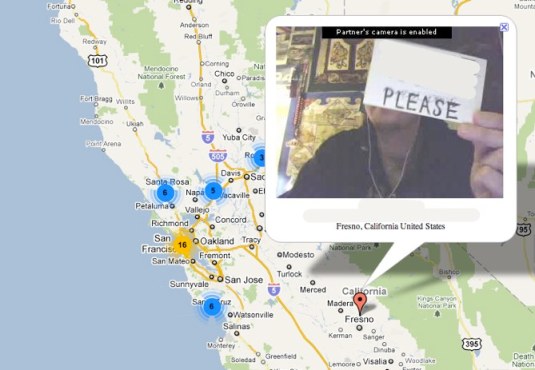 Hopefully, this doesn’t herald the end of the ChatRoulette party.

A mashup called ChatRouletteMap pins screenshots of the site’s users to a map. This doesn’t collect data on every single one of ChatRoulette’s users. ChatRouletteMap’s developer(s), who didn’t reveal their identities, said they built a program which randomly connects to different partners. The program copies their IP addresses (which show up on the screen) to pinpoint them to a map.

ChatRoulette is an explosively popular anonymous video chat service created by a 17-year-old student in Moscow named Andrey Ternovskiy. When you log on, it pairs you with a random person from somewhere else in the world, and you instantaneously connect with them through your web cam. The anonymity is part of the fun: because no one knows who you are, and there’s little chance you’ll ever meet them in real life, you’re free to do almost anything in front of your computer. Of course, a small percentage of the site’s users have taken the liberty of exposing themselves, so there ends up being a lot of explicit content on the site. That’s the roulette part.

ChatRouletteMap’s developers say that the service is actually not that anonymous from a technical perspective:

” Contrary to the popular belief that CR is completely anonymous, it actually relies upon Adobe’s Stratus servers to establish peer-to-peer connections between users. This affords CR a relatively low upkeep cost as they aren’t handling the massive amount of video data themselves, simply handling the handshakes required for the clients to establish with one another. The downside to this is that CR has reached a critical mass where Adobe’s service is simply unable to cope with the load being placed upon it. You can find more information in the Adobe Stratus support forums, the technology is still in beta so while not directly supported Adobe is working to provide it more resources, since although CR is slowing it down, it also affects ‘any’ other software built which would use Stratus.

Upon connection the application which captures the images takes the users IP and passes it through an IP-to-Geolocation service, this information is then embedded within the screenshot for easy parsing into the mashup when uploaded. The data behind the mashup is generally refreshed every 1-2 days, though sometimes the images are sat on for a longer period of time, and sometimes CR is simply in such an abysmal state of connecting that we just give up on trying to collect any data.

Other ChatRoulette fans are fighting back: a vigilant user built this application. You run the app at the same time you play ChatRoulette. If something inappropriate comes up, you can flag it, and your conversation partner’s location will be pinpointed in real-time based on their IP address. The app also lets you copy that data, so you can paste it in the chat and let them know they’ve been tracked.

Will this mean fewer pervs on the service? I doubt it, but perhaps some people will think twice.