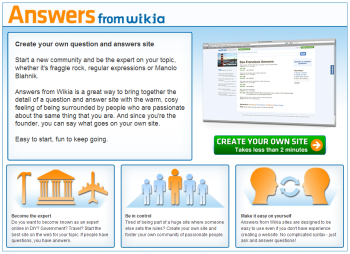 Wikia previously relaunched its Wikianswers service early last year, which directly competed with the likes of  Yahoo Answers, wikiAnswers (a competing service with a very similar name), and Answerbag. With Wikianswers, Wikia allowed users to ask general questions, and receive answers from the community. The new Answers from Wikia service will allow dedicated users who are experts on specific topics to build up their own niche Q&A communities.

Wikia will promote questions asked within these small Q&A communities throughout its existing communities — hopefully generating interest from its more dedicated users. Wikia also doesn’t require users to register to participate in its answer sites, so these niche Q&A sites will be more open than typical answer sites on the web.

After relaunching WikiAnswers in February 2009, the site has gone on to generate over 600,000 questions, with over 150,000 answered. Wikia also recently launched some niche do-it-yourself sites created by individuals, including EverythingAuto, and ClubPenguin.

Wikia was founded by Wikipedia’s Jimmy Wales and Angela Beesley. The San Francisco-based company raised $14 million in funding throughout 2006 by Bessemer Venture Capital, First Round Funding, and Amazon, among others. In September 2009, Wikia announced that it achieved profitability a year earlier than expected.