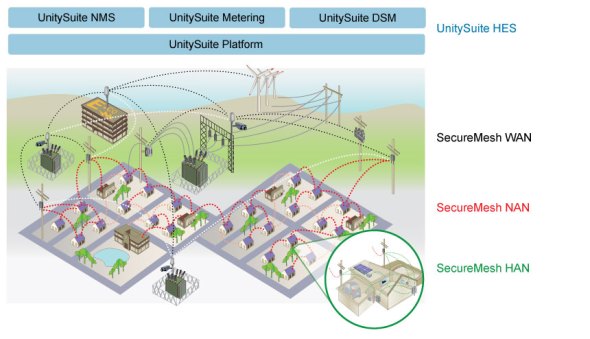 Trilliant, one of several companies providing the wireless networks that carry energy use data from smart meters back to utilities, announced today that it can now seamlessly connect wide area networks and local (neighborhood) area networks. The new service gives utilities total — and more secure — control over where data and energy flow, and at a lower cost than typical cellular networks.

The SecureMesh Bridge products are already being used by Canadian utility Milton Hydro. Results from this trial are looking very positive and will be used to market the combined network architecture to other utilities in the U.S. and abroad. Trilliant is already very active in the U.K., where it has a deal with British Gas to provide communications between the utility and its electrical and gas meters.

Trilliant’s decision to push private, integrated networks highlights the differences between it and its competitors — differences that could soon determine who wins in the smart grid networking arena.

Its most formidable rival is Silver Spring Networks, which is relying on private wireless mesh networks too. Also based in Redwood City, that company has leveraged its more than $218 million in capital (compared to Trilliant’s $40 million)  to become the industry’s frontrunner — inspiring IPO speculation, recently backed up by the company’s quiet selection of underwriters. It’s image has also been boosted by a deal with Pacific Gas & Electric.

But other companies besides Silver Spring are angling to provide the same services in very different ways. Grid Net, for instance, wants to use Wi-Max networks to transmit metering data, while SmartSynch says using existing cellular networks, like AT&T’s, is the way to go.

Which method ultimately succeeds remains to be seen. Wi-Max continues to be too expensive to realistically compete, but that could definitely change. SmartSynch, which landed a deal with the Tennessee Valley Authority, argues that the private network companies, like Trilliant and Silver Spring will soon hit a dead end. For now, it’s a race to see who can recruit the most utility customers.