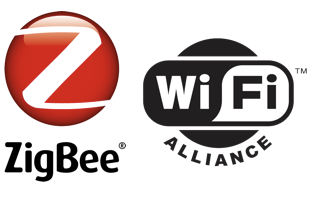 The smart grid community saw a major meeting of the minds today: the ZigBee Alliance and Wi-Fi Alliance have teamed up to develop applications for home energy management and networking.

Both ZigBee and Wi-Fi are wireless protocols that allow electronic devices, smart meters and utilities to wirelessly send data back and forth. This is the foundation of the burgeoning smart grid: the ability of utilities to receive data directly from their customers’ meters and for consumers to have access to the same data so they can conserve energy and save money off their monthly bills.

So far, ZigBee, which draws less power and uses less bandwidth, has been the big name for utilities and meter makers. It was around for years, lurking in the shadows with few applications, before it caught the smart grid wave. Wi-Fi, on the other hand, has become widely known for providing internet to laptops and service to mobile phones — but it’s only just now becoming a force in the smart grid and energy management space.

There’s not a lot of room for multiple wireless protocols in this industry. Appliance makers like General Electric and Whirlpool, looking to come out with dishwashers, refrigerators and the like that transmit data about how much energy they are using, don’t want to have to choose among many different protocols. And the National Institute of Standards and Technology (NIST), the agency drawing up guidelines for Smart Grid development, would like there to be only a few main protocols, in order to prevent confusion and promote open standards.

This means that there will soon be a purge of protocols with less traction. So it looks as though the the partnership between Wi-Fi and ZigBee may be more of a survival pact than anything else. Appliance makers can now outfit their products with both Wi-Fi and ZigBee radios, so that they comply with the NIST-backed Smart Energy 2.0 open standard for smart grid devices. The upshot: consumers won’t have to worry that they chose the wrong appliance, or that their Wi-Fi thermostat won’t communicate with their ZigBee meter, etc.

This opens up a new range of possibilities for home energy management companies like Tendril, OpenPeak, People Power, Google Powermeter and more. These services are built on the idea that energy consumption data can be drawn from individual appliances, and that their operations can be automated or controlled remotely from people’s computers or mobile phones. Now these companies don’t have to worry about being shut out of either ZigBee or Wi-Fi, opening the field for more, and faster innovation.