Thanks to services like Twitter that let users publish quick messages nearly as fast as they come to mind, a host of real-time search engines have recently emerged — engines that quickly index these messages and serve up the most current ones related to a particular search keyword. Sency is the latest startup to jump into this market. And so far, it seems to be keeping its head above water despite all the competition. Its real-time search engine launched in October and has already seen traffic grow from 10k to 150k hits in 5 months.

Competitors such as Collecta, CrowdEye, OneRiot and Topsy each try to offer something unique (usually, in the way they filter real-time search results). Also, they run the gamut from startups with no funding to companies with up to $27M in funding (e.g., OneRiot). Evan Britton, founder of Sency, is convinced that it’s still early in the development of this space and that there is certainly room for bootstrapped companies like his to carve out a respectable portion of the market.

Britton, a veteran Internet marketer, started Sency in September as a side project with minimal investment. The company has been able to make fuller use of the Twitter API by being “whitelisted” (approval for up to 20k requests per hour) since January.

As mentioned in a recent post analyzing real-time search start-ups at Search Marketing Expo, it’s still a bit early to discern the full range of real-time search use cases. The fact that companies such as Twitter offer access to oceans of data free of charge helps foster an environment ripe for innovation and opens a window of opportunity for unfunded players such as Sency (at least, for a while longer).

While many of the aforementioned startups let users filter results by such things as message source, time and relevance, Sency offers a relatively simple view of results filtered exclusively by time with two separate views of search results: text and links. By splitting links from text, the company is able to better thwart spammers who merge text related to a particular keyword with links directed to their own (unrelated) sites.

The real-time web is relatively new. Though some believe it is still too early to ascertain its potential, a new venture fund called Betaworks was recently setup to invest $20M in real-time web startups. The fund boasts investments from the likes of Ron Conway and already sold one of its portfolio companies, a real-time search engine named Summize, to Twitter.

In such an environment, access to data and a strong Internet marketing background such as Britton’s are definitely assets. Nevertheless, as the real-time search space grows and better-funded competitors continue to innovate, a self-funded project such as Sency could lose some steam. Indeed, the site’s user interface and graphic design could do with an upgrade in order to improve the user experience.

Britton says he’ll be addressing such issues but is currently focused on increasing his user base as well as maintaining their satisfaction with the service. In terms of distribution, the company offers a widget, which bloggers and publishers can freely deploy. Also, the company is expanding its international reach with separate sites already launched for the Spanish, French, German and Italian markets.

Sency is based in Santa Monica, Calif. 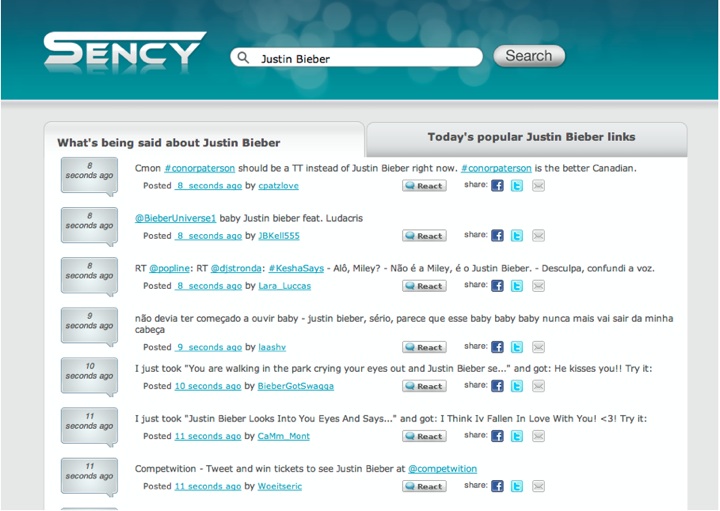