For some strange reason, Twitter was testing its mysterious new @anywhere platform on a public website tonight, and TechCrunch managed to land screenshots of most of its juicy bits before the site was taken down.

The site was located at eggboiling.com. If you visit it now you’ll likely get an empty index screen. The domain name is registered to Isaac Hepworth, a former Google employee now working at Twitter. Some of Hepworth’s recent tweets carried the notation “via Egg Boiling,” an indication that he used his website rather than Twitter.com or a Twitter app to post them. The site was very sparse and only demonstrated a couple specific functions, so you didn’t miss out on much.

Previously all we’ve known about @anywhere has come from a short blog post by Twitter cofounder Biz Stone. He described it as a framework that will enable Twitter features across major sites like Amazon, The New York Times, and The Huffington Post, but he only managed to give us a couple descriptions of what it may actually do:

Imagine being able to follow a New York Times journalist directly from her byline, tweet about a video without leaving YouTube, and discover new Twitter accounts while visiting the Yahoo! home page—and that’s just the beginning. 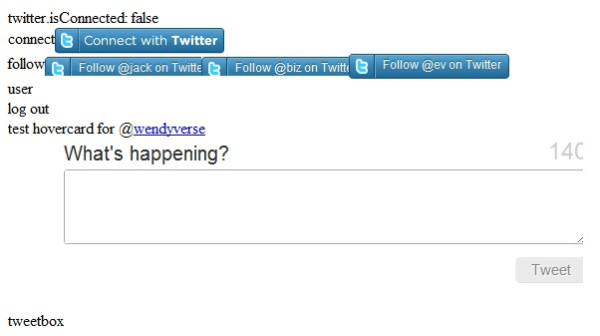 As you can see, it featured a “Connect with Twitter” button, which was basically a better-looking version of Twitter’s current method to authenticate your account with other sites. There were also “Follow” buttons that allowed you to follow users without leaving the page. The buttons were smart enough to tell if you were already following them.

In addition, there was an example of a hovercard which showed you a user’s latest tweets and follow count in a small box — which was pretty much exactly the same thing you see when you hover over usernames at Twitter.com right now. Lastly, the page featured a simple text tweet box which also functioned just like Twitter’s site.

The key element in all of the examples was the ability to seamlessly access Twitter functionality on a site without leaving it. None of them were exactly mindblowing, but together they will go a long way towards ingraining Twitter even deeper into our web experience.

Check out some more screenshots below, via TechCrunch: 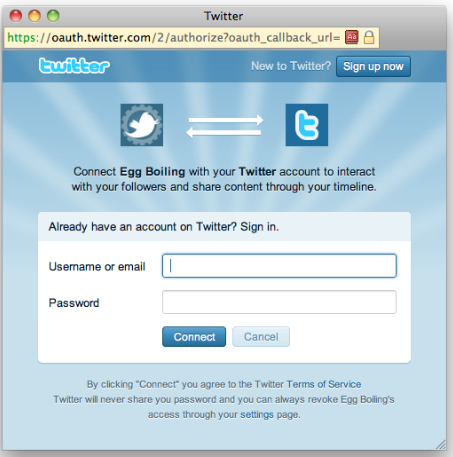 Above: The login screen for the "Connect with Twitter" button 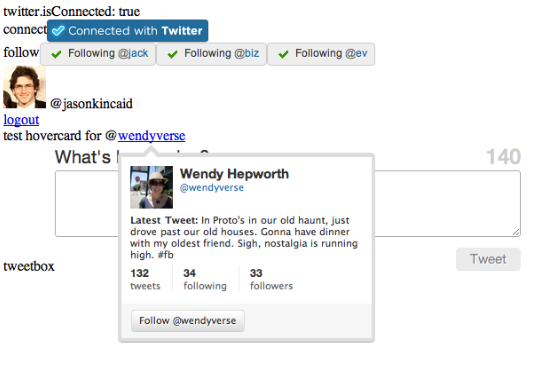 Above: The hovercard in action