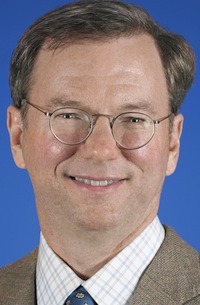 Google chief executive Eric Schmidt talked on-stage about the company’s future this evening at Google’s Atmosphere conference for chief information officers. In addition to fielding some general questions about Google’s plans, its strengths, and its weaknesses, Schmidt also talked about the idea that Google now approaches its products with a “mobile first” attitude, as he put it at the Mobile World Congress in February.

What’s really important right now is to get the mobile architecture right. Mobile will ultimately be the way you provision most of your services. The way I like to put it is, the answer should always be mobile first. You should always put your best team and your best app on your mobile app.

Schmidt also said the technology he is most excited about in this area is HTML5, the web language that should enable more powerful applications in your browser. This gets back to Google’s emphasis of web applications over client applications that you download or install. Earlier in the afternoon Bradley Horowitz, vice president of product for Google Apps, declared that “client applications in many ways are becoming extinct,” and Google also showed off Chrome OS, which takes this idea all the way with an operating system that’s entirely browser-based web apps with nothing downloaded to the client.

Schmidt also offered some thoughts about what defines Google as it grows and moves into new product areas. People may think of Google as a search company, but Schmidt argued that it’s an “information” company. Later, when asked about how Google’s business model evolves as it reveals new products, he said, “We’re basically in the advertising and enterprise software business.”

At the end, one of the Atmosphere attendees asked Schmidt for an overview of Google’s strengths and weaknesses. Schmidt acknowledged that Google frequently makes mistakes, and he returned to one of the issues he’d addressed earlier, how Google stays innovative as it grows.

“As we have become more middle-aged as a company, it’s harder and harder to do completely new things,” he said.