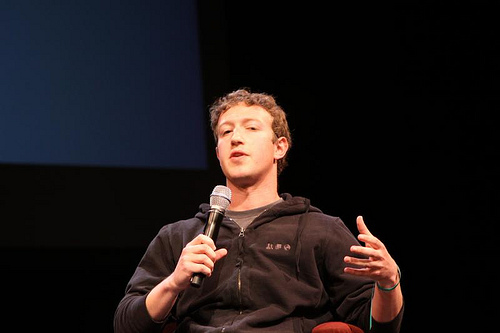 Facebook CEO Mark Zuckerberg emphasized a different philosophy for how the Web should be organized today at the f8 conference in San Francisco.

“The Web is made of unstructured pages linked together. The open graph puts people at the center of the Web. It puts personal and semantic meaning behind the Web — I like this band. I am attending this event,” he said. “We think what we will show you today is the most transformative thing we’ve done for the Web.”

Zuckerberg said the company would use the open graph to make the Web an instantly personal and sociable experience.

“The Web is at a really important turning point right now. Up until recently, the default on the Web has been that most things aren’t social and most things don’t use your real identity,” he said. “We’re building toward a Web where the default is social. Every application will be designed from the ground up to use real identity and friends.”

At the first f8 conference in 2007, Zuckerberg introduced the idea of the social graph — mapping the idea of a massively interconnected web of relationships. The open graph has a much broader definition, and goes beyond Facebook. Facebook has mapped social relationships, while Yelp, for example, has mapped out local venues.

“If we can take these separate parts of the graph, we can create a Web that’s smarter, more personally and semantically aware,” he said. “One of the core ideas of the social graph is what people are connected to…. For example, I am friends with Chris Cox. I live in Palo Alto.”

Zuckerberg said these core relationships could fundamentally change the idea and experience of Facebook’s news feed, which is sometimes referred to as a stream of updates.

“The stream is ephemeral. The services that form a stream don’t actually form a connection between you and your favorite restaurant. What we’re going to do is make it possible to map those connections. Once it’s possible to understand these connections, a lot of really neat things become possible. We can show you a news feed story when three of your friends all like the same restaurant. If you write a review, we can put that restaurant on your profile.”

The company said it had rearchitected its entire structure around this strategy and was releasing a graph application programming interface.

With the new open graph approach, Facebook is launching a series of social plugins. Zuckerberg showed a demo of a CNN-Facebook integration. When a user logs on, they can see other friends or people who enjoyed the same content. There will also be a plug-in that shows the activity of friends on CNN’s website.