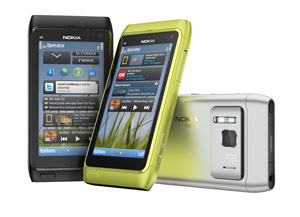 Nokia sells more handsets worldwide — nearly half a billion in 2009 — than top competitors Samsung, LG and Motorola put together. You could throw in fifth-ranked Sony Ericsson and Nokia would still be close to beating the bunch with nearly 40 percent market share.

But in America, Finnish Nokia has lost its footing through several missteps, including an attempt to end-run America’s superpowerful wireless carriers and sell unlocked phones directly to consumers, without the usual subsidy provided in exchange for a subscription contract. Buyers didn’t bite.

The N8, a new phone planned to go on sale in the third quarter of this year, is Nokia’s attempt to recapture the Facebook generation. What do young social networkers do? They post short text updates at all hours. They shoot and post lots of photos at social events and on outings. They play video and games a lot.

Nokia has built, in effect, a Facebook member’s smartphone. It packs a 12-megapixel camera with four times the digital resolution of Apple’s 3-megapixel iPhones, and more than twice the 5 megapixels in Verizon’s new Droid Invincible. Users can edit photos directly on the phone, then share them immediately onto popular social networks without plugging into to laptop to edit, or going home to upload.

The N8 shoots YouTube-ready video at YouTube’s highest resolution of 720 scan lines, compared to the iPhone’s 480.

The phone also has a built-in social network application that merges Facebook and Twitter updates into one stream on the phone’s home screen. It can download Facebook events onto its calendar. There are built-in maps with travel guides for 70 countries, great for wanderlust daydreaming even if you can’t afford to see the world. 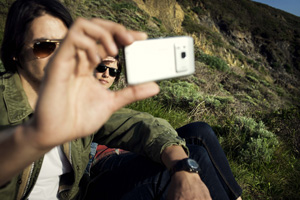 Who’s the market for this phone? Let’s go to the press kit: Nokia mixes sterile product photos with several shots of a young couple at the seaside with their N8’s. The young lady tucks her Nokia into the back pocket of her jeans. These are would-be iPhone users.

Selling against the iPhone will be hard, because of the gadget’s role as a cultural icon. But Nokia has correctly identified two of Apple’s most exploitable weaknesses.

First, the iPhone shoots pretty good photos, but its camera isn’t as high-res as it could be and you can’t edit photos on the phone before uploading to Facebook, Twitpic or wherever.

Second, Apple seems culturally averse to social networking. The company builds its own Web browser, but doesn’t build a Twitter or Facebook application into its mobile devices and laptops. (Ask a software developer how easy Twitter would be compared to Safari.) Steve Jobs once demoed podcasting during a product launch, but he never tweets from his new gadgets, nor does he go to Facebook and click Like buttons. His idea of a photo feature is a fussy Apple-hosted family album, not a random bunch of look-we’re-drunk shots uploaded to Facebook at 2:00 AM.

Nokia’s press kit does something edgy for a gadget launch: It contains a blurry shot of the N8 being used by young adults outdoors, in which the N8 itself is out of focus. The photo is meant to look like it was taken by a friend with a cellphone, not a photographer with a truckload of equipment. Instead of “look at this awesome phone,” it says, “this could be you.”