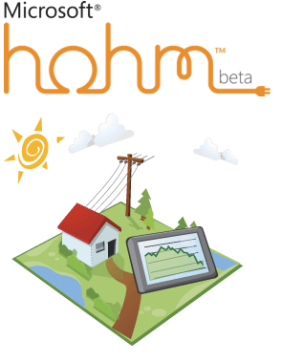 Microsoft and Google went head to head in the energy-monitoring arena today at GigaOm’s Green:Net conference in San Francisco — with Microsoft clearly coming out on top. Troy Batterberry, representing the company’s Hohm platform, talked circles around Google PowerMeter program manager Ed Lu, who offered up “no comment” more than anything else.

Both Hohm and PowerMeter serve energy-consumption data to utilities and consumers so that they can make better — ideally more energy-efficient — decisions. Hohm does so through a Web-based property that estimates household energy use and delivers custom-tailored recommendations for how to save energy to users. PowerMeter also shows users how much energy they are using and how much it is costing them in real time — directly on their iGoogle homepages so that monitoring energy use becomes a part of their daily internet routines.

It’s rare that you see Hohm and PowerMeter folks take a stage side by side, but there was surprisingly little tension. In fact, both speakers acknowledged the collaborative nature of the home energy monitoring and management business. That said, three key differences between the platforms emerged over the course of the talk:

1. Business model vs. no business model: When asked about their commercial plans, Lu was very quick to say that Google has none (at least for now). This is the same tune he was singing back in November at VentureBeat’s GreenBeat conference, when he said PowerMeter was more of a humanitarian gift than a business. You can bet that Google does have a revenue model in mind — it’s played coy in the same way about so many other products, like ads and mobile. Plus it just nabbed approval to buy and sell energy just like a utility. It’s obviously up to something in energy. But Google’s lack of transparency is off-putting.

Microsoft, on the other hand, has never shied away from its desire to make money. Batterberry was very clear about Hohm’s commercial potential, stating that it will go after the market when it comes to providing actionable data, as well as selling relevant products and services back to local utilities. Currently, Hohm is monetized via an advertising model, integrating products and services consumers can use to become more energy efficient into its recommendation engine. “We’re in this business for a reason,” Batterberry said. And it shows in the product’s focus and consumer-friendly interface.

2. Utility partnerships vs. device partnerships: Summarizing Google’s overarching strategy for PowerMeter, Lu said the company is looking to build as many partnerships with relevant players as possible. So far, it has been emphasizing utility partnerships. It is now working with ten worldwide to use data from smart meters to show consumers how much energy they are using and how much it is costing. It also has two device partnerships with British AlertMe and Energy Inc.’s The Energy Detective, which also beam energy consumption data back to the Google system. It seems like the mission here is to make very granular data available to as many people as it can.

Miscrosoft is taking a different approach. Instead of making intensely accurate smart meter or device data available to customers through utility partners, it has opened its platform to anyone who wants to use it. These users can volunteer basic data about their homes and behaviors, and Hohm estimates how much energy they are consuming, where it is going, and how much they are spending on it. The idea is to get more people involved with the platform before it anchors itself to utilities and the Smart Grid.

Granular data functionality is on its way later this year, Batterberry says. Microsoft is working on an array of partnerships with appliance and device makers so that Hohm will soon provide just as accurate of data about where energy is being used in homes or buildings. And it’s being relatively straightforward about who it’s talking to and what they are working on.

For example, it just announced a deal with Ford to use Hohm to automate the charging of electric vehicles. When the electric Ford Focus comes out, Hohm will make sure owners know exactly how much energy they are pumping into their cars, how much it is costing them, and during which hours they would see the cheapest electricity rates.

Based on this evidence, it looks like Microsoft is not only moving faster, but smarter. By operating independent from utilities (while also taking advantage of deals with them where it can), it is opening itself up to more prospective users while also working on the accuracy and technology piece. Google seems to be far more dependent on the utilities it is working with, and doesn’t have as well developed a strategy when it comes to hooking everyday appliances (refrigerators, clothes dryers) into its system.

All this aside, Lu was clear that Google has a lot of alliances in the hopper when it comes to automotive and device integration, it just can’t talk about them right now.

3. Hands-on vs. hands-off: Both speakers remained mum on the number of users each of their platforms has attracted, but Lu went a step further: Almost half of PowerMeter users check into their energy data three or more times a day he said, and more than 80 percent check in at least once every three days. “So we know it’s sticky,” he said.

But this isn’t necessarily the positive sign Google is spinning it to be. Most people don’t want to have to check in continually with their energy use to increase their efficiency or change their behaviors.

Again, Microsoft is taking a bit of a different angle. On one hand it does provide a very dynamic recommendation engine to its users. Based on the parameters homeowners themselves provide, Hohm suggests actions that they can take to slash their energy consumption — ranging from adding insulation to installing compact fluorescent bulbs to running pool filters in the wee hours of the morning. But this isn’t the only way Hohm plans to shape its users’ practices.

Rather, it is capitalizing on the concept that the best way to get people to go green is to do it for them without requiring them to change at all. When Microsoft adds more appliance and device integration to the Hohm platform, it will be able to automate actions for homeowners. For example, it will tell refrigerators only to make ice (an energy-intensive process) during off-peak hours when electricity is at its cheapest. Or, as mentioned earlier, it will switch on car charging at 3 a.m. when demand is low. Not only will this breed of connectivity keep demand low and the grid healthy for utilities, it will save Hohm users money off their monthly electricity bills.

That highlights another salient difference between the two services: Microsoft Hohm seems to much more geared toward saving you, the homeowner, money — via appliance coordination, practical recommendations, and real-time pricing data. Google seems to be much more about the nitty-gritty data, and making it available in the best way possible.

Of course, one can never tell what Google is up to behind its “no comment” defenses. Several years ago it said that it would never launch its own mobile phone — now, behold the Nexus One. So its wide-eyed assertion that PowerMeter lacks business pretensions remains to be seen. For now, though, it’s just annoying.