Are Microsoft and HP abandoning the tablet market to Apple? Of course not. What they’re giving up is the idea that a tablet computer has to contain the full power of a desktop or laptop computer in a much smaller, lighter device. Parse TechCrunch’s headline carefully: “Hewlett-Packard To Kill Windows 7 Tablet Project.” Is it the tablet they’re killing? No, it’s Windows 7.

Both Microsoft and HP have spent years trying to build a tablet that would enable its user to run a hospital ward, publish a personal journal, or at the very least stay on top of an overbooked schedule of meetings, travel, and deadlines.

Watch Microsoft’s concept video for Courier. Look how productive it will make you!

Meh. After a few weeks of lying on the VentureBeat writers’ couch with an iPad, it’s become obvious Apple’s tablet was built primarily for media and information consumption, not for the creation of new content or the maintenance of a busy career. As the SF Weekly put it, “The touchscreen keyboard is meant for idle tapping, not overcaffeinated typing … Steve Jobs invites us to relax, read The New York Times, and look at photos.”  And videos. 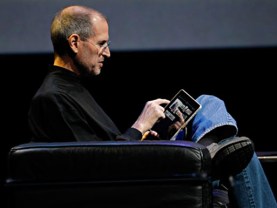 That’s why Jobs demoed the iPad in a big, comfy chair. The image goes against Apple’s long-running brand identity as the preferred power tool of writers, graphic artists, and IT professionals.

But a consumer-focused gadget — one optimized for reading and watching, rather than composing and recording — has a much larger potential market. At the same time, its hardware can be a lot less powerful, its operating system and applications a lot less flexible. The results: Lower cost, lighter weight, cooler heat, longer battery life, and far fewer tech support marathons.

Ironically, the iPad is a hot seller among productivity-crazed professionals who already own MacBooks and iPhones. It invites them to drop their always-on lifestyles and lie on the couch with something more interactive than a TV. I use an iPad almost every afternoon to goof off on the VentureBeat writers’ couch, away from my 24″ iMac workstation. I’ll tell you I’m researching an important feature story. I’m lying.

Couch computing seems to be the killer application for a keyboardless, mouseless, super-light touchscreen tablet. As Anthony Ha reported last week, it’s likely that HP bought Palm not just to enter the smartphone market, but to secure Palm’s small, fast WebOS operating system for use in less powerful but more consumer-friendly slates, as HP calls its tablets. Microsoft is almost certainly already building a tablet based on the Windows Phone platform rather than Windows 7 for laptops. The resulting gadget won’t let you do all the clever things Courier promised. That’s OK. You weren’t going to anyway.