One-stop social networking site Threadsy officially took the wraps off its well-tested website today, ending the beta period for what it calls an “integrated communication client” that combines email, Facebook, Twitter, instant messaging, and other social Web media to create a centralized way to stay in touch with other people.

The San Francisco-based company, founded in mid-2008, is well-known in startup circles. The site was nominated for a Crunchie award for best design last year and gained praise from VentureBeat for expanding the usual “Like” and “Unlike” buttons to a more meaningful “Love” and “Abhor.”

Thready’s gimmick is that while it can suck down personal content from just about any popular social network or email account, it tries to filter messages you need to see from those you really don’t. “We separate messages that seem explicitly sent to you from messages to the whole wide world. We view it as required reading versus optional reading,” co-founder Rob Goldman told me. For example, if a friend posts a status update about their lunch, Threadsy moves it aside in favor of an item the same friend posted to your Facebook wall.

In addition, Thready’s user interface adjusts itself based on what you click. “When you open a tweet or click on someone, that marks them as someone you’re interested in,” said Goldman. “Threadsy brings them to the fore. We call that a pivot. When I open a message from someone, we pivot the interface to show information about that person as you open the message from them.”

In the screenshot below, I clicked on entrepreneur Jason Calacanis’ latest message to his personal mailing list. Threadsy framed the message with Jason’s latest updates on ten — yes, ten — separate social networks. No way could I keep up with the guy. Threadsy tries to show me only the Jason-generated content he probably meant me to see.

There are more social network aggregators than anyone can keep track of. What makes Threadsy interesting is where it differs from, say, TweetDeck and Seesmic. Those applications are social network consoles designed for people who want to track every single conversation. Threadsy, whose layout reminds me of Microsoft Outlook, tries to filter those conversations down to: Here’s what you need to see. Oh, you’re interested in that message? Here’s the surrounding context. Click that person enough and I’ll raise their relevance.

Goldman, along with VP of Engineering Udi Nir, founded the company after Goldman spent seven years at Shopping.com. After eBay bought Shopping.com in 2005, Goldman rose to general manager of the Shopping.com business unit within eBay.

How will Threadsy make money? For now the service is free. But soon the company will roll out a dual revenue model, where users can either use an ad-based service for free, or pay a premium subscription rate to not get the ads. 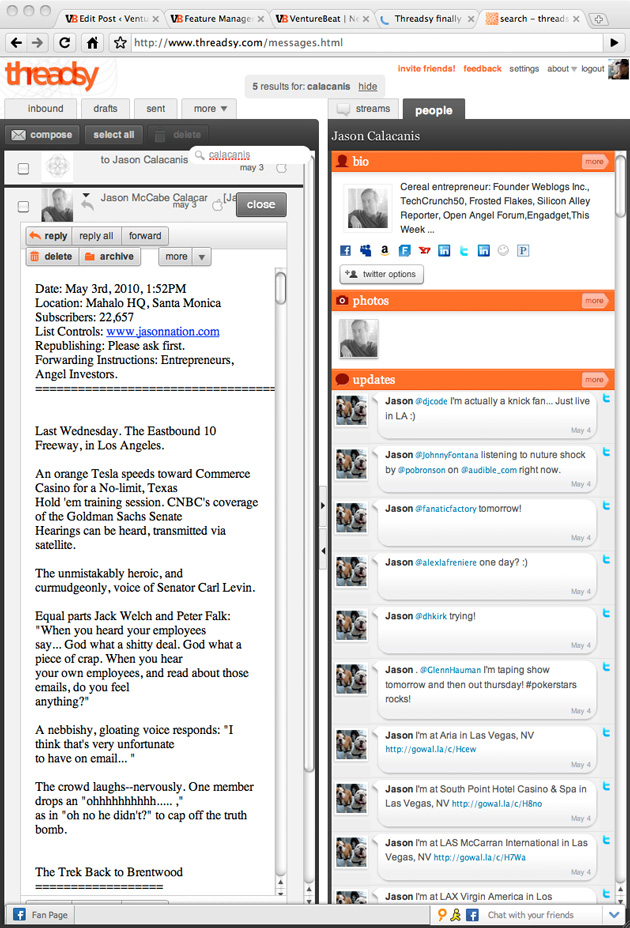