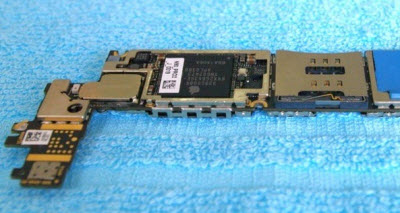 Apple is using its own A4 microprocessor in a next-generation iPhone, according to an analysis by Vietnamese bloggers who obtained a prototype phone.

The A4, which was evidently designed at Apple by the engineers it acquired from PA Semi and Intrinsity, is a 1-gigahertz ARM-based chip that serves as the brain of the iPad. So it’s not surprising that Apple would repurpose the chip for future iPhones.

The A4 combines an ARM processor with graphics on a single chip. It uses graphics licensed from Imagination Technologies, a U.K. company that created the PowerVR graphics architecture. Apple owns 9 percent of Imagination, while Intel owns 16 percent.

Apple’s wider use of the A4 in multiple product lines will give it the unit sales volume necessary to reach economies of scale for its chip. The more devices it sells, the more Samsung can manufacture, the faster the companies can reduce the costs of the chips, and the more profit falls into Apple’s pockets.

It’s a smart strategy, as long as Apple can keep up with or surpass the broad merchant semiconductor makers with performance. That means Apple will have to continuously invest in new chip designs. For other companies, that’s not an option and its much easier to buy chips from the likes of Broadcom, Intel, Marvell, Nvidia, Texas Instruments and Samsung.

But Apple has deep enough pockets to pull this off. It also has a vested interest in differentiation. Apple has never wanted to have exactly what other companies have. It wants faster chips than its rivals have access to so that it can set its own products apart from the pack. Other companies don’t seem to mind being part of the pack if it means their costs are lower. Apple also wants to capture more margin for itself. This way, it doesn’t have to pay another chip design company, which might have a chip fabricated for $10 and then sell it for $30.

But as we pointed out in a recent story on vertical vs. horizontal strategy, the thinking has been changing in Silicon Valley. Google acquired its own chip talent with its acquisition of Agnilux. It thus joins the likes of IBM, Oracle, and Microsoft in having chip design capability in addition to its other software businesses.

I asked Paul Otellini, chief executive of Intel, about why so many tech companies were moving to vertical strategies where they owned their own chips. He said, “Apple envy.” Then he added, “They should remember that in our industry, open wins. You have to be open.”

I suspect that Otellini is right, though we can argue about exactly where and how companies need to be open and where they need to own their own technology. Apple has decided that it should own the designs for at least two of its major product lines. We’ll see if it ever moves off Intel chips for its Mac computers. That may sound crazy, but Apple has already pulled off a switch to its own chips that has surprised everyone.