After months of beta testing, Microsoft officially launched Office 2010 today at a media event in New York. The event offered few surprises, but made it clear that Microsoft is serious about integrating Office with online components, while not ignoring refinements to its desktop version.

Office 2010 is the first major release of Microsoft’s flagship productivity software since Office 2007. This time around, there aren’t any major changes like 2007’s revolutionary Ribbon interface — which aimed to simplify user workflow with contextual menu options, and offered a more visually dynamic interface than the tiny Office icons seen in previous versions. With 2010, Microsoft further refined the Ribbon interface, and has also made it much more customizable. The confusing Office menu has been replaced with Backstage View, an upgrade to the traditional File menu that integrates printing features and other document settings. Microsoft has also brought the Ribbon to Outlook, which for some reason never received the new interface in 2007.

It also marks the first time that Microsoft has integrated Office with the cloud. The new Office Web apps — which include Word, Excel, Powerpoint, and OneNote — aren’t as capable as their desktop counterparts, but they allow Microsoft to compete with other cloud-based productivity suites like Google Docs and Zoho. Microsoft is positioning the web apps as companions to its full desktop suite — which is great for integration with the desktop apps, but it’s something that may ultimately keep its web solutions behind competitors.

Sharepoint 2010, Microsoft’s business collaboration software, is also deeply integrated into Office 2010. It brings another aspect of cloud computing into the Office experience; Sharepoint allows business users to quickly share their documents with colleagues, and collaborate on them together in real time.

Microsoft also briefly demonstrated Office Mobile 2010 running on a Windows Phone 7 device. Most notably, it features Sharepoint integration — which together with the Sharepoint support in Office Web Apps will allow users to access their documents practically anywhere.  Microsoft is offering Office Mobile 2010 as a free upgrade for Windows Mobile 6.5 users with previous versions of Office Mobile.

Office 2010 is available for business users today, and will be made available to general users  some time in June. Users will be able to purchase Office 2010 electronically at Microsoft’s Online Store, and will for the first time have the option of buying it via “product key cards” at some retailers. The key cards resemble typical gift cards, and will be sold at a slight discount from the boxed version of Office. 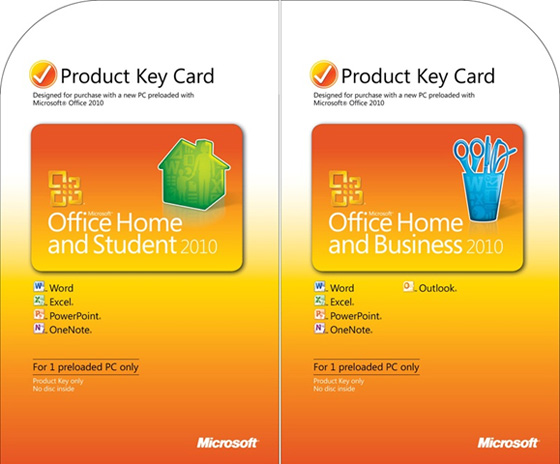