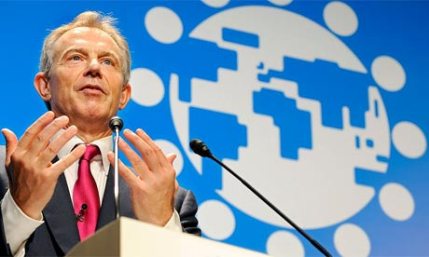 A long-time proponent of climate change policy, Blair is credited with being the first head of state to add the issue to the G8’s docket. He has been outspoken on the topic for years and has assumed a new role leading the Breaking the Climate Deadlock Initiative (launched with the Climate Group), building consensus among world leaders about what must be done to reduce greenhouse gas emissions and enforce better environmental policy.

Blair will be offering his guidance via his consulting firm, Tony Blair Associates, which comes with a wealth of political and corporate connections that could help Khosla better navigate the cleantech sector.

In enlisting Blair’s services, Khosla seems to be exhibiting a degree of Kleiner Perkins envy. Al Gore has (for the most part) been a real asset to its team, lending credence to its lofty green agenda. After all, the firm has made some outlandish moves in cleantech, including sinking millions into Bloom Energy‘s too-good-to-be-true fuel cells, and Fisker Automotive‘s luxury hybrids, despite competitor Tesla Motors’ dominance of the space.

There’s also speculation that Gore’s presence has helped politically. The Department of Energy’s decision to loan $529 million to Fisker Automotive had watchdogs guessing that some strings were pulled — although the company and its investors say this isn’t the case, and Gore isn’t directly involved with company. Now it appears Khosla has also recognized the value of government clout and connections in this area — potentially sparking a trend.

Like many of the most successful VC firms in Silicon Valley — CMEA Capital and Foundation Capital chief among them — Khosla is sprinting to grow its green technology portfolio. But it’s taking a slightly different approach. Instead of investing in new, path-breaking companies like solar panel and electric car builders, its focus has been to develop sustainable technologies that will work or solve problems with existing infrastructure.

A prime example: the firm’s emphasis on biofuels that could work in today’s cars and jets. In this area, it has invested in Mascoma, Amyris Biotechnologies, LS9, and Coskata — four of the most notable names in the industry. It’s also working to make current combustion engines more energy efficient, with investments in companies like Transonic Combustion and EcoMotors. Advanced battery development, green building materials, and energy efficiency plays are also a high priority for the firm.

All told, Khosla Ventures has about $1.1 billion dedicated to its cleantech practice. Most of its investments fall into the $5 – 15 million range, but it’s increasingly interested in more risky, experimental deals in the neighborhood of $2 million.

The question now might be: which firms will try to snap up eco-conscious California Governor Arnold Schwarzenegger as a partner or adviser when he leaves office at the start of next year?