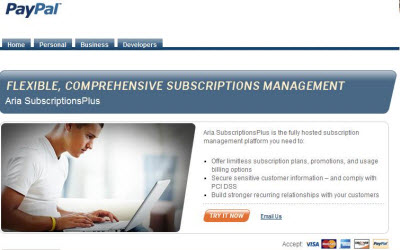 Online payment vendors such as eBay’s PayPal have become popular for one-time purchases. But Aria Systems is expanding PayPal’s repertoire to subscription management.

PayPal has handled the payments part of subscriptions for years. But to date, subscription management systems have been clunky and hard to use. Aria wants to enable vendors such as PayPal to offer subscription management as a self-service option for merchants, said Lance Walter, vice president of marketing for Aria Systems in San Mateo, Calif. The service is now live and the company has been running  a pilot for a few weeks.

That could be important for online merchants that are looking for more predictable revenue streams and long-term customer relationships. And subscription options are important in markets from games to publishing. Aria Systems automates the process of invoicing customers and notifying subscribers for renewals. PayPal itself has more than 84 million active accounts in 190 markets. It handled $71 billion in payments in 2009. The company has to keep on adding new services such as Aria’s in order to stay ahead of rivals entering its home turf.

Aria was founded in 2003 and launched its first billing system service in 2006. It has raised $14 million in two rounds from Hummer Winblad and Venrock. Rivals include Amdocs, Portal Software (owned by Oracle) and a number of other software-as-a-service vendors.

“What we’ve learned so far is that online billing is about a lot more than just billing,” said Walter.