The field of startups taking on questions and answers is about to get a little more crowded.

PeerPong, a San Francisco-based startup that helps people find experts to answer their questions, launched its beta today. PeerPong scours peoples’ social media profiles on sites like Twitter to determine their interests and talents. If you log on, it will sift through your status updates on Facebook to figure out what you’re knowledgeable at. Then it creates an online directory of experts across 12 major categories and routes them the right questions that match their skills.

“You want to be able to find an answer from someone who has actually dealt with the problem, as opposed to a general consensus kind of answer,” said cofounder Ro Choy, who was previously chief revenue officer for RockYou, the social-gaming company.

PeerPong uses natural-language processing to analyze what you talk about most influentially on Twitter. It looks at different keywords in your tweets, and compares how often you mention them to other Twitter users. Interestingly enough, Choy says Twitter can be a better gauge of interests than Facebook, because people are projecting very publicly what’s compelling to them. He said he probably wouldn’t share as much content about technology, startups and venture capital with friends and family members on Facebook as he would on Twitter, for example.

PeerPong is a slightly different approach from other startups like Quora, Hunch, and Aardvark, as well as Facebook’s forthcoming Questions feature, which are all part of a broad trend to organize informal knowledge through questions and answers. Aardvark, a question-and-answer service recently acquired by Google, may offer the closest comparison. But it generally routes questions to friends and friends of friends, instead of subject-matter experts across the entire Web.

The company has raised about $2.8 million from investors including First Round Capital, Charles River Ventures, Partech and DCM. 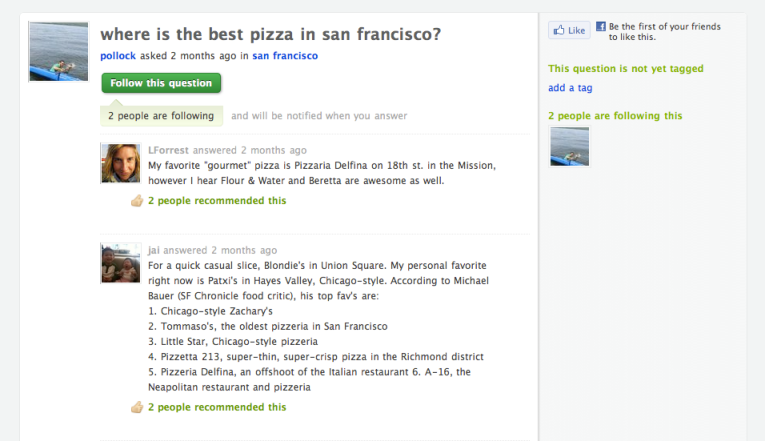