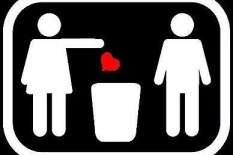 One in four people who date online have been dumped the lazy way: They read about it on Facebook.

A survey of 1,000 Facebook users run by SNAP Interactive, the New York City-based creators of the “Are YOU Interested” dating app on Facebook, suggests that part of Facebook’s appeal is you don’t have to have the embarrassing we-need-to-talk meeting:

SNAP says 30 percent of the respondents were female, 70 percent male. Or at least that’s how they clicked. In a prepared statment with the report, CEO Clifford Lerner wrote, “Facebook can be a wonderful tool to manipulate a person’s image for dating purposes as well as providing an easy way out when it comes to doing the dirty work.” Now if only you could use Facebook to quit your job.