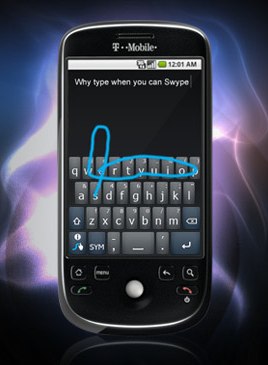 Swype, makers of innovative touchscreen text-input technology, will bring its software to all Android devices tomorrow, the company told TechCrunch, a technology blog. It’s not a full release of the software — its feature-set will be limited, and it will only be available for a few days.

The company’s touchscreen keyboard technology differs from virtual input methods seen on iPhone and Android devices. Instead of hitting individual software keys one at a time, it allows you to swipe your finger across the screen — at which point the software’s predictive algorithm determines what you’re trying to spell. The company boasts 95 percent accuracy for the software.

A Swype employee was able to trounce the previous Guinness World Record for texting speed using the software, so it definitely seems plenty fast. The software was previously only available built-in to certain phones, including the Samsung Omnia II and the Motorola CliqXT, so — aside from a beta release to some 25,000 users — its release tomorrow marks the first time it’s been widely available.

Swype is also meant for more than just phones — it can technically be used in any device with a virtual keyboard. With its widespread Android release, it could quickly become a useful text-input method for Android tablets when they show up. It’s also something that the iPhone could never see given Apple’s current app store rules. It proves how being a more open platform allows Android to innovate in ways Apple’s platform can’t.

Android users can grab the Swype app from the company’s site at http://beta.swype.com. Make sure to change your Android phone settings so that you’re able to install and run apps from “unknown sources.”

The Seattle, WA-based company recently landed $5.6 million in second-round funding, which was topped off with a $1 million investment by DOCOMO Capital.