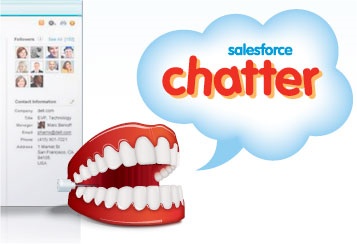 Will this be the day that business social networking grows up? Salesforce.com founder and chief executive Marc Benioff probably hopes so. Today, the company is announcing the availability of Chatter, its Facebook-style social network for companies.

Since it first announced Chatter in November, Salesforce has been rolling the service out to early test customers. Team members each get their own profile, then they can follow each others’ activity. Salesforce recently added the ability to form and work in groups, which the company says was the most requested feature. Perhaps more important is the fact that Chatter isn’t limited to people — users can also get alerts when documents and accounts are updated.

Plus, outside developers can build their own Chatter apps, or embed Chatter features into existing tools. For example, a Salesforce-backed company called FinancialForce showed me an app for automating the process of Chatter alerts. Yesterday, a Salesforce spokesman also demonstrated a Web development tool created by CA Technologies, where team members can talk to each other within the tool using Chatter.

Business social works are a familiar product, especially among startups — in fact, PBworks Vice President of Marketing Chris Yeh wrote a column last week calling for those companies to “grow up” and take their products more seriously. Meanwhile, bigger companies are showing increasing interest, with Cisco announcing its social networking and collaboration tool Quad earlier this month and Microsoft saying that businesses can use its software to build their own social networks.

Benioff, never someone to risk understatement, declared in the company announcement that Chatter is “the most exciting thing I’ve worked on in my career,” and said that it’s at the forefront of bringing “Cloud 2” (his umbrella term for social, mobile, and real-time technologies) into businesses.

The early results seem positive. Salesforce says as 90 percent of the test customers said they would recommend Chatter to others, and that those customers reported a 22 percent increase in productivity on average.

The real test, however, is the current launch. Not only because Salesforce will make Chatter available to more customers, but also because this is the product’s first opportunity to fulfill Benioff’s other big goal — expanding Salesforce beyond sales and customer service departments. His hope is that since sales teams work with other departments, they’ll pull more users into Chatter. As he put it in November, Chatter should be Salesforce’s first “enterprise-wide app.”

The service is available for free to users with existing Salesforce accounts, and will cost $15 per user per month for others.