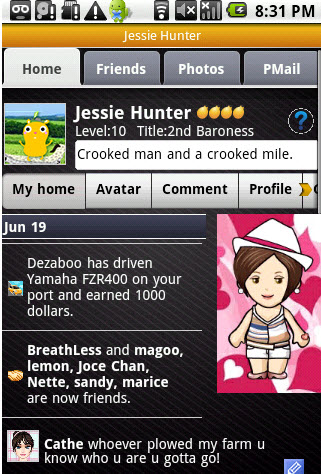 PapayaMobile has raised $4 million for the launch of its new mobile social networking platform on Android devices.

The Beijing-based company already has more than 3.5 million global users for its cross-platform mobile games. The company got those users in the past year by launching its own social games on mobile phones. Now it’s opening up the platform to third-party developers who can integrate the social platform into their own games.

The announcement shows that Android is maturing as a mobile device platform, since it now has companies such as PapayaMobile coming in to provide more ecosystem support.

The platform can add features such as leaderboards, achievements, and friends lists to games, allowing them to spread in a more viral fashion through cross promotion. It also helps game developers monetize their apps more easily. It lets users create their own mobile phone avatars and it app notifications. In short, it has everything a social network platform needs.

Si Shen, chief executive of PapayaMobile, said the company will use the new funding to help increase its developer community, launch more social mobile apps, and expand its management team. The company has a U.S. office in Menlo Park, Calif.

The round was led by DCM. Hurst Lin, general partner at DCM, said that PapayaMobile is at the intersection of two of today’s hottest sectors: mobile gaming and social networking. Since Apple is about to launch its own social gaming platform, Game Center, on the iPhone, Shen said that the opportunity on Android phones is better.

PapayaMobile is distinct from rivals such as Ngmoco’s Plus+ platform, Scoreloop, and Aurora Feint. Of those, only Scoreloop is on Android, and PapayaMobile has unique features such as allowing users to fulfill a special offer in lieu of paying cash for a game. Offers can boost revenue for a mobile game by 50 percent and reduce spending on ads by 60 – 80 percent, Shen said. She added that it takes developers less than five minutes to integrate PapayaMobile’s platform into a game.

Shen said that third-party developers can benefit from the fact that PapayaMobile already has a large base of users, most of whom are in the United States.

The company was founded in 2008 by Shen, a former Google mobile product manager in China, and Wenjie Qian. PapayaMobile has 25 employees and previously raised a small angel round. The company has a dozen games on both the iPhone and Android platforms. Shen said that growth on Android has been very fast in the past six months.