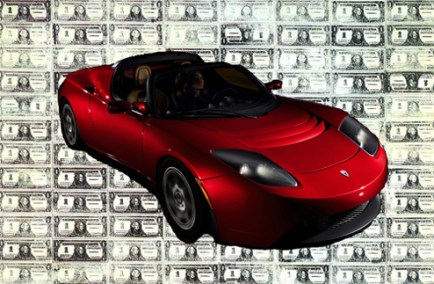 There’s a certain amount of festivity surrounding Tesla Motors‘ IPO, scheduled for tomorrow. We just heard that the electric-vehicle company has sent out care packages to people who placed reservations for its all-electric sedan, the Model S. Now it’s raising the bar on the sale itself, putting up 13.3 million shares, instead of the original 11.1 million.

This 20 percent increase could mean the difference between a $178 million and $244 million IPO, depending on the price its underwriters set for its shares. This is much higher than the $100 million sale the company first filed for at the end of January. But when it announced its partnership with Toyota last month, its CEO, Elon Musk, predicted that the eventual total would be much higher.

Tesla, which hopes to sell shares at a price between $14 and $16, is responding to the IPO already being oversubscribed by both institutional and retail investors. VentureBeat reported last week that retail investor interest in the company has been heating up on private share trading sites like SharesPost for the last two months — leading market watchers to predict a stock price closer to $16.

Musk himself will be selling 909,212 shares (bringing in as much as $14 million), according to the newly amended S-1, but even after that, he will still be the majority shareholder with 28.4 percent of the company. The biggest venture investor, VantagePoint Venture Partners will be selling 238,748 shares. Its other investors include Bay Area Equity Fund, the Westly Group, Compass Venture Partners and key family and friends like Musk’s brother Kimball Musk, who is putting 12,692 shares up for sale.

After Tesla debuts, Toyota is contracted to buy a $50 million stake in the company, as part of a broader partnership that includes Tesla’s $42 million purchase of the NUMMI automotive plant in Fremont, Calif. The companies have announced, but not formalized, plans to build a new line of electric cars together.

Following the IPO, and Toyota claiming its stake, Tesla will still have 93.5 million shares to sell. This puts its market cap at $1.5 billion — higher than the $1.4 billion the company initially hoped for, but lower than the $1.84 billion estimated by NeXt Up! Research last week.

The electric vehicle maker is one of a tide of cleantech companies hoping to have lucrative public sales despite consistent losses and distant plans to turn a profit. Tesla reported a loss of $56 million for 2009, and $29.5 million for just the first quarter of 2010. The trend began last September when advanced battery company A123Systems saw a 50 percent spike in its stock price during its first day on the market, while never making it out of the red. Now, still lacking traction, the company has seen a major decline in its stock price, dampening investor enthusiasm for the cleantech IPO market.

This more lackluster approach has been held responsible for the middling public exits of biofuel maker Codexis and solar module maker Jinko Solar in the last two months. But most analysts, like John Gartner of Pike Research, are saying Tesla’s general sex appeal will probably yield a hot sale, like A123’s, with prices dropping off later .

Why the decline? The company doesn’t have its new product, the Model S, coming out for two more years at least. It’s only sold slightly over 1,000 of its electric Roadsters to date — and that $109,000 sports car is not a viable business model by itself. The company brings in some revenue by selling battery packs and chargers to one of its major investors, Daimler, but definitely not enough to go  profitable in the near future.

Gartner says he thinks the company will need to raise even more money between now and the release of the Model S, either from new, bigger partners, the government or by selling more stock.

In the short term, Tesla has done a bang up job generating buzz among investors. Musk hit the road last week to give presentations to prospective buyers — a presentation that included plans for a who new line of cars based on the Model S architecture, including a cabriolet, an SUV and a van.

Tapping its most loyal base — those who have already put down the $5,000 deposit on their Model S sedans two years in advance — the company has sent out gifts. A nice touch, according to one recipient, Hank Heyming, who noted that this “seems like a pretty creative way to build some hype pre-IPO without violating the quiet period.”

Tomorrow’s the big day. We’ll see if Tesla was right to up the stakes, or simply buying into its own bravado.