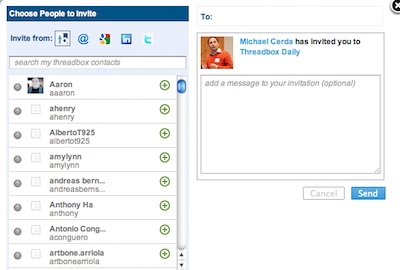 MySpace is in the process of acquiring the team and assets of social messaging service Threadbox.

A source close to the matter tipped VentureBeat off on the news, and MySpace has since confirmed the deal with us. The statement from their spokesperson said, “We’re thrilled to announce that the talented Threadbox team has joined MySpace. We’re in active discussions about how we can incorporate their innovative technology into our site.”

Palo Alto, Calif.-based Threadbox is focused on fixing the problems of email, making it into a better collaboration tool. The goal is to replace email and instant messenger accounts with a system that does a better job of harnessing conversations, files, tasks, dates and opinions.

MySpace, the big social network owned by News Corp., needs help in the area of user communications and this deal is a step in that direction. In June, Threadbox launched its Threadbox Messenger service, which replaces email and instant messaging clients with a thread-focused system. You sign up for a Threadbox account and it pulls your email and instant messenger services into Threadbox’s own user interface. You can search through real-time conversations, invite any of your contacts on Gmail, Facebook, Twitter and LinkedIn to a thread, hold one-on-one conversations in a private thread, share links to threads, and receive notifications on your computer desktop when there’s Threadbox activity.

Threadbox was founded as CC:Betty in November, 2008, by Michael Cerda and Ben Dean, who also founded Jangl, a web-voice firm that was sold to Live Universe and JaJah two years ago. Threadbox was incubated at Venrock and raised additional funds in 2009. Angel investors included Hillsven and Seraph Group. In full, Threadbox had raised $2 million. the company launched at the DEMO conference in the spring of 2009.

In June, Threadbox said it had 60,000 users spread out among 20,000 businesses. Rivals include Calinda and Liaise. All four of Threadbox’s full-time employees have joined MySpace, and talks continue about how to incorporate Threadbox’s technology. But MySpace is not formally acquiring the company itself.