Trilliant, one of several companies piecing together a cleaner, more efficient smart grid, just got a big shot in the arm. The Redwood City, Calif. company has raised $106 million in venture funding to expand globally and continue developing its products.

Trilliant provides mesh networking equipment that allows smart meters to communicate wirelessly with utilities and, increasingly, consumer-facing energy monitors. Its technology can beam this data over long distances and within local and even home-area networks, making it more versatile than what many of its competitors are offering. 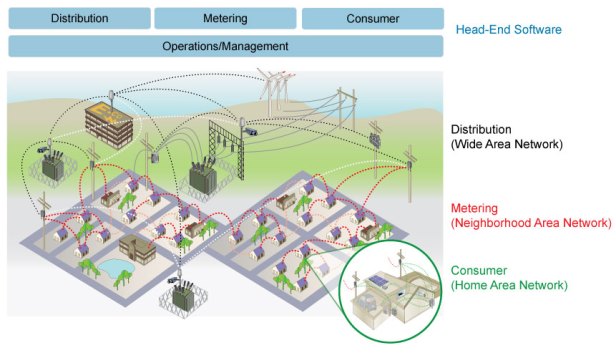 The recent funding stands out for two reasons. First, it’s a massive amount for a company that has been relatively capital efficient so far. It already has a solid client base in the U.S., including Duke Energy, San Diego Gas & Electric and Union Gas. So $106 million should go a long way toward establishing footholds in other parts of the world — particularly Europe, Asia, the Middle East and Africa, according to CEO Andy White.

Second, the capital came from a flock of prestigious investors, including General Electric and ABB, VantagePoint Venture Partners and Investor Growth Capital, among others. The new alliances with GE and utility equipment maker ABB will no doubt grease the wheels for further expansion.

Coinciding with the funding, Trilliant has also brought a new customer into its fold: Central Maine Power. The utility, distinguished by the rough and rural region it serves, will be using Trilliant’s SecureMesh communications network. If its offerings can work there, they can work anywhere, says Eric Miller, senior vice president of solutions. The Maine deal should help further prove out its technology.

The money, combined with powerful partners, may be enough to see Trilliant through to an IPO, according to Miller, who made it sound like such a move could happen in the next two or so years. But the company is far from alone in this ambition.

Trilliant has some tough competition to face — most formidably from Silver Spring Networks, which uses a radio network protocol very similar to Trilliant’s. That company, armed with more than $200 million in capital, partnerships with the likes of Pacific Gas & Electric, and clear intentions to IPO (it retained underwriters for a filing earlier this year), has positioned itself as the market leader. It’s unclear whether there will be demand for both companies on the public markets.

And Silver Spring isn’t the only play Trilliant needs to worry about. There are several other companies pursuing different protocols that accomplish the same thing. SmartSynch, for example, is relying on cellular and public networks for data transmission, while Grid Net is trumping up WiMax as the ultimate solution for long-distance data exchanges. If these ideas start to gain traction, then interest might migrate away from proprietary radio networks.

Still, Miller and CEO Andrew White are confident that Trilliant’s products are different enough to win over the market. Perhaps most convincing, they are lower-cost than many rivals’ products, which has helped the company win contracts with big utilities like British Gas, E.ON U.S. and Hydro One, as well as smaller municipal utilities.

Its multi-tiered solution is also special. Its SecureMesh networks can alternate between radio frequencies to adjust to different transmission distances, while keeping data secure. This was made possible by Trilliant’s acquisition last year of SkyPilot, which added in long-distance capabilities. Now its networks can serve major regions, as well as neighborhoods and extremely local areas.

“We are going to be expanding into each one of these areas,” says White. “Expanding our offerings for the wide-area and in-home area is underway, and that marketplace is just getting started.”

Going global should also help Trilliant maintain an edge over some of its competitors who have been bound to the domestic market, or only experimenting in one or two other countries. And now it has the cash reserves to make this happen.

It previously raised $40 million from MissionPoint Capital and Zouk Ventures in 2008. Both of those firms also joined the recent round.