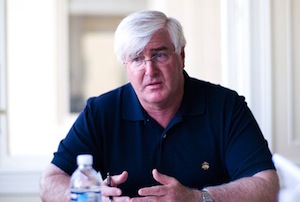 Are there too many angel investors funding too many startups? That was the topic of some debate today at AngelConf, which was held at the Mountain View, Calif. campus of incubator Y Combinator.

The opening speaker was well-known and prolific angel Ron Conway (pictured), who argued that if anything, there should be more angel investing, not less. He said he hopes that any entrepreneur that has “the guts” to start a company gets funded.

“The more angels we have in Silicon Valley, the better,” he said, later adding, “We are funding innovation. We are funding the next Facebook, Google, and Twitter.”

Critics have described this high-quantity approach to angel investing as “spray and pray,” but Conway said angel investing is a hit-driven business. If you invest in enough companies, then you’ll eventually put money in a home run that pays off so well that it funds all your future investments.

Conway closed by citing the Black-Eyed Peas song “Let’s Get it Started,” and urged all the potential angel investors in the room to follow the song’s words.

“Welcome to the angel investing world,” he said. “Get the checkbooks out.”

Speaking a few minutes later, TechCrunch Editor Michael Arrington sounded more mixed on the growth in angel investing. There’s a worry among venture capitalists, he said, that angels are training “an entire generation of entrepreneurs who are building dipshit companies” that sell to Google for $25 million. In fact, that criticism might be extended to Y Combinator as well, which could be seen as “the king of the dipshit companies.”