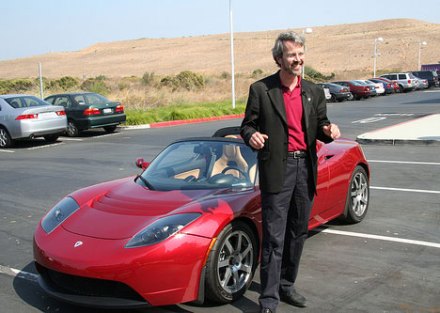 Many global automakers have research outposts in Silicon Valley.

BMW’s is one floor of an unremarkable office building in downtown Palo Alto, while Volkswagen’s much larger Electronics Research Laboratory (ERL) occupies a whole building in an office park nestled in the foothills above Stanford University.

It turns out that more than a year ago, Volkswagen added a “name” to its largely unknown staff of researchers, scientists, and engineers.

It’s Martin Eberhard, founder of recent IPO Tesla Motors [NSDQ:TSLA], last seen a year ago in an ugly court battle with Tesla CEO Elon Musk that was settled out of court last fall. But for 18 months, he has been VW’s electric-vehicle engineering director for the ERL center.

Battery cost is the main hurdle facing VW for any electric vehicles. Eberhard, it says, will research ways to package small “commodity” lithium-ion cells–like those used in mobile phones and laptops–for automotive use.

Makers like Toyota, General Motors, and Ford, by contrast, use smaller numbers of much larger-format lithium cells. Most auto industry analysts feel the commodity cell approach, pioneered by Tesla, cannot economically be scaled up for mass production.

Ten days ago, Volkswagen unveiled its aggressive plans for hybrid and plug-in vehicles. CEO Martin Winterkorn has said that it expects fully 3 percent of its projected 2018 global sales of 10 million to be zero-emission electric vehicles, an ambitious goal.

It will launch a 2012 Volkswagen Touareg Hybrid at the end of this year, a Jetta Hybrid in 2012, and VW plans all-electric versions of the Jetta sedan, the Golf hatchback, and the Up minicar by 2013.

The aggressive expansion is part of VW’s plan to surpass Toyota as the largest automaker in the world by 2018.

Nonetheless, its first hybrid (the Touareg sport-utility vehicle) will come to market late this year, just as the all-electric 2011 Nissan Leaf and the 2011 Chevrolet Volt range-extended EV hit dealerships. So Volkswagen has some catching up to do.