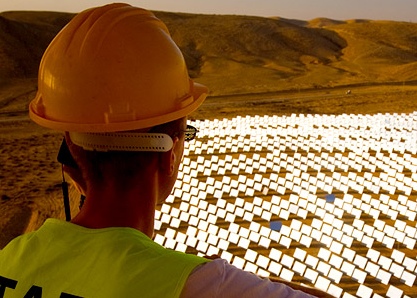 BrightSource Energy, one of the most successful companies betting on solar thermal technology, just landed a major victory: an official recommendation for the California Energy Commission’s approval to move forward on a 392-megawatt development in the Mojave Desert, which has been three years in the making.

California Energy Commissioner Jeffrey Byron has issued a 576-page report encouraging the commission to green-light the project, which could power upwards of 140,000 homes and employ 1,000 during construction. This gives BrightSource a serious leg up with the full five-member commission, which will consider the action after 30 days.

To put the win in context, the Oakland, Calif.-based company has had to jump through a number of fiery hoops to make its massive Ivanpah array a reality. To begin with, it needed to raise a great deal of money, which it did surprisingly successfully from the likes of Google Ventures, VantagePoint Venture Partners and Chevron Technology Ventures. It also nabbed a $1.4 billion low-interest loan guarantee from the U.S. Department of Energy.

But it’s also had to trudge through miles of red tape. Acquiring the proper permits and passing environmental reviews has been a long, drawn-out process. The company even had to scale back its plans for Ivanpah from 4,000 acres to 3,500 acres (from 440 megawatts to 392), to make way for an endangered species of tortoise that resides in the Mojave.

BrightSource has faced a lot of opposition to its building in the desert. California Senator Diane Feinstein even pitched legislation to make 1 million acres of the Mojave part of a protected monument zone, off limits to renewable energy developers.

But today, it looks like BrightSource’s persistence is starting to pay off. With the Energy Commission’s blessing, the company should soon be able to break ground on the three plants comprising the Ivanpah array, designed to be the largest solar thermal project in the world.

The company is so confident in Ivanpah’s forward momentum that it has already sealed deals with utilities Pacific Gas & Electric and Southern California Energy to buy the power generated by the plants.

Byron’s report to the commission underscores the merits of BrightSource’s technology, arguing that the benefits the Ivanpah development could provide will outweigh its adverse environmental impact.

One of Byron’s key points differentiated BrightSource’s installations from the bulky crystalline silicon rooftop arrays that most people think of when they hear the word “solar”. The company has touted its solar thermal methodology as a major cost-saving advantage. Instead of a field of photovoltaic panels, it plans to fill its acres with mirrors that concentrate sunlight on liquid. When the liquid boils, it produces steam which turns turbines to generate electricity.

The Ivanpah plans include 174,500 heliostats — pivots that turn the mirrors to follow the sun throughout the day — and three 459-foot towers that would contain the liquid solutions and turbines. The company says this design should be able to channel 550 degrees of heat, allowing it to use the most state-of-the-art turbines on the market.

A lot of hopes are pinned on Ivanpah’s success. It has been poised as BrightSource’s flagship development for a while now, leading the company’s roadmap to build 14 solar plants (generating 2,610 megawatts total) across the American southwest in the next 16 years.

The company also has a lot of investors waiting to see results. More than $300 million has been sunk into the company with little to show for it. In addition to Google, VantagePoint and Chevron, it has taken funds from Draper Fisher Jurvetson, Alstom, Morgan Stanley, Black River Asset Management, Statoil Hydro Venture, DBL Investors and Bechtel.

The California Energy Commission does have some incentive to approve Ivanpah. In addition to creating jobs and contributing to local economies who need the help, the project would go a long way toward helping the state hit its goal of generating 33 percent of its energy from renewable sources within the next decade.