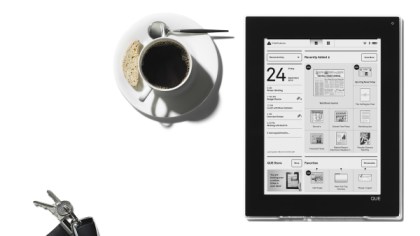 Plastic Logic has canceled its revolutionary Que electronic book reader, which was made out of plastic electronics.

The Mountain View, Calif.-based company announced today that numerous production delays have torpedoed the product that was designed as a paperless briefcase for business professionals. The Que ProReader product was announced in January at the Consumer Electronics Show in Las Vegas and was supposed to be on the market already.

But the company couldn’t get manufacturing off the ground. That’s a pity, since it had raised more than $200 million and used much of that to build a plastic electronics factory. Plastic Logic had figured out a way to embed transistors, the building blocks of electronics, in plastic. The Que ProReader would have had features like the ability to display crisp newspaper graphics on a flexible display.

On top of the problems with the launch, Plastic Logic got hit with a price war in electronic books. After the Apple iPad hit the market in the spring, a price battle ensued, with Amazon dropping the price of its basic Kindle book readers. Barnes and Noble and Sony also took part in the price fray, forcing Plastic Logic to rethink its high-end design.

Now Plastic Logic said it will move on to a second-generation design.

“We recognize the market has dramatically changed, and with the product delays we have experienced, it no longer makes sense for us to move forward with our first-generation electronic reading product,” said Plastic Logic chief executive Richard Archuleta, in a statement. “This was a hard decision, but is the best one for our company, our investors and our customers.”

Separately, the Financial Times reported that a Russian state-owned company, Rusnano, is talking with Plastic Logic about buying an investment stake in it. Check out our video demo of the Que from CES.