E27 is a technology blog that covers Web innovation in Asia.

But Asia’s promise as a market is foiled by the practicalities of vast cultural and social differences within the continent. In practice, startups in Asia end up trying to make it markets fragmented by language, or other sociocultural differences.

The states that make up developing Asia (Japan and Korea are markets unto themselves) is a prime example of a long tail — thousands of niches separated by language, social strata, culture and geography, who are under-served by products and services designed for monolithic mass markets.

Startups themselves have used Asia’s fragmentation to their benefit by seizing on its diversity. Take Muvee, which was started in Singapore about 10 years ago. The company’s technology started life as part of a government-linked research project. The idea was to create software that automatically edited raw video footage and turned it into something watchable.

Muvee almost didn’t make it, since the company behind it was started in the aftermath of the dotcom bust in 2001. The eight founders struggled to raise funding as capital dried up.

“We used to joke that we’d met so many potential investors that our deal was almost like a public offering!” said Philip Morgan, Muvee’s chief operating officer.

Muvee did eventually find the right investors and today it has successfully leveraged its base in Singapore to ship more than 100 million units of its software on computers produced by HP. Its major markets are Japan, Korea, North America, and Europe. It has staff from 15 countries in its Singapore and it lends space to smart guys with an idea who need an office.

Other startups use their local knowledge of the region to find niches they can use. Brandtology, an online intelligence firm, did just that. It covers 10 cities in Asia, and that includes smaller cities like Hangzhou, not just the famous capitals. Part of its value to clients is being able to parse online chatter about a brand regardless of the language.

“Clients based in Singapore or Hong Kong run regional campaigns and require language support for Mandarin, Japanese, Korean and Bahasa Indonesia,” said Brandtology chief executive and cofounder Eddie Chau. “Those in charge of the campaigns may not be native speakers of the local languages, so they greatly value the inputs from our native social media analysts who are able to provide localized insights and translations of key issues.”

Another firm that used its Asian base to develop products for the long tail is EyePower Games. The company, started in Singapore in 2004, makes educational games using interactive video technology. One of its products is NewsMaker, which lets students create their own broadcast news productions. NewsMaker was used by the Association of Southeast Asian Nations, the region’s major multilateral organization, in a project to get students in Brunei, Cambodia, Myanmar, Malaysia and Singapore to create documentaries about their countries and cultures.

EyePower Games has used its experience in building products for the Asian long tail to tap developed markets as well. Indeed, one of its investors is Arizona State University, which saw the potential to use EyePower software in schools in the US.

“When we went to the US, we were able to attract the attention of Arizona State University which saw the potential we had,” said Benson Loo, chief executive and cofounder of EyePower Games. “[The university] made a sizable investment in us to allow us to push our sales and marketing efforts further in the US.”

There is no shortage of startups in Asia who try to capture the continent’s vast potential. But as the firms above have shown, the key is to recognize that Asia is an aggregation of many niche markets. 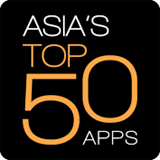 Asia’s Top 50 Apps contest:
Regional telecommunications firm Singtel and Asia tech blog e27 are inviting you to vote for apps developed in Asia. The best apps will bask in media attention and have a chance to access the carriers’ 300 million customers spread across eight Asian countries. Help the search by voting here.