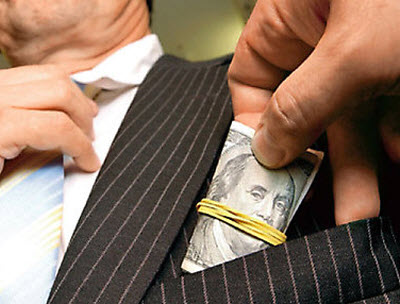 This is one of those great gigs of the modern iPhone era, until you get caught. A mid-level Apple manager was arrested on Friday for allegedly taking $1 million in kickbacks from Asian suppliers for the iPhone and iPod, according to a published report.

Paul Shin Devine, a global supply manager at Apple, and Andrew Ang of Singapore, were named in a federal indictment and a separate civil suit. A grand jury returned 23 counts of accusations involving wire fraud, money laundering and kickbacks.

In a statement, Apple spokesman Steve Dowling told the San Jose Mercury News, “Apple is committed to the highest ethical standards in the way we do business. We have zero tolerance for dishonest behavior inside or outside the company.”

The two men allegedly used an elaborate scheme to hide the payments in foreign bank accounts and a front company. Code words like “sample” were used to refer to the payments so that Apple coworkers would not become suspicious. Devine reportedly gave confidential Apple information to Ang and other suppliers. In return, the suppliers and manufacturers gave Devine kickbacks, which he shared with Ang. That helped the suppliers get better contracts with Apple. Devine had several foreign bank accounts, including accounts in his wife’s name. CPK Engineering was also a front company that received the kickback payments.

The companies were not identified but are located in countries including China, South Korea, Taiwan and Singapore. In the civil suit, Apple claimed Devine received more than $1 million in payments over several years. [Update: The Wall Street Journal reports the suppliers were Cresyn Co. Ltd. in South Korea, Kaedar Electronics Co. Ltd. in China and Jin Li Mould Manufacturing Pte. Ltd. in Singapore.]

Devine, 37, of Sunnyvale is being held by the U.S. Marshals Service. Ang’s whereabouts are not known. The FBI and the IRS both investigated the matter.