If you’ve been keeping an eye out for emerging market opportunities, it might interest you that robotics is one of today’s fastest growing technologies. Innovation takes place primarily in the battlefield (Iraq and Afghanistan) and through defense contracts, so most of the developments taking place are not yet widely known. 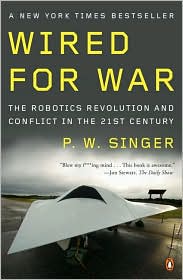 In “Wired for War,” author P.W. Singer explains how this progress will dramatically change the way that war is fought.

Science fiction fans will be struck at how much art and reality are converging. The author explains why this transformation is happening now, accelerating after 9/11, and covers some implications including our future propensity for war.  Billions of development and procurement dollars and the continued price/performance improvement of the low cost off-the-shelf hardware from which robots are built means that the capabilities of inexpensive robots will soon begin to dazzle us in the domestic market, as far-fetched as that may seem.

Big ideas from “Wired for War”:

Robots are getting cheaper, faster and smarter – really fast. Your autofocus camcorder lens offers the same technology as robots being deployed in Iraq. Common, low cost, USB connectors are used for robot arms and appendages. The same technologies that deliver reduced size and improved performance in PCs, consumer electronics and smart phones will deliver exponential progress in robotics.

The US government got robotics religion in 2001. At that time, the Senate Armed Services Committee mandated that one-third of all attack aircraft be unmanned within the decade, and a third of all ground combat vehicles be driverless by 2015. At the core of the shift is U.S. public resistance to American casualties on the battlefield.

IRobot is an example of a newly public robotics company capitalizing on this revolution. The company has two market-leaders in radically divergent applications. Roomba, a robotic domestic vacuum cleaner, has sold millions of units. Its predecessor, though, was developed for the Air Force to collect cluster bomblets from airfields.

IRobot also sells Packbot, a leading bomb disposal robot, first introduced in the 9/11 World Trade Center rescue effort. Thousands now support both Iraq and Afghanistan military efforts in the field, delivering hundreds of millions in sales, and saving the lives of hundreds of soldiers. Packbots have also been adapted to applications including field rescue (Medbots), armed with liquid bandages, morphine and diagnostic equipment.

In the Air Force, the most dramatic shift that’s taking place is unmanned drones. Cadets with extensive video game experience often do well at controlling them remotely from locations half way around the world in Nevada. Systems are being designed more and more like video games to help users pilot them, processing the large amount of data information required to do so effectively from a long distance.

In the sea, robotic ships are being developed that require little or no crew, as well as submersibles that can explore areas that humans can’t. The BP oil spill recovery effort provides a timely civilian demonstration of what underwater robots can accomplish.

For the future – the military has begun field-testing robotic soldiers:  Packbots and other Explosive Ordinance Disposal (or EOD) robots armed with weapons for selective operations.  One day, squads of robotic soldiers headed by a human squad leader may effect raids and similar operations.  Robotic soldiers are more accurate and lack the human emotional challenges facing their human counterparts.

Today’s robots can only operate on about 30 percent of battlefield terrains but designs are being tested that overcome the limitations of robot ‘legs’ and make robotic soldiers a reality.  The first soldier may have three or four legs to deal with balance and special terrain issues, looking more like an armed dog.

Clearly there are questions and repercussions: How will this new battlefield help or challenge American security cover; How will our enemies react? Will America (or others with this technology) be judicious with force if its own troops are not at risk?

Applied knowledge:
For entrepreneurs, the lesson is clear: Robotics will be a large growth market.  We will see more opportunities emerge alongside these first applications in the military, but also in vertical industrial applications where a hazard exists – or even household uses.

Be on the lookout for single function applications that can be effectively replaced (biohazards, nuclear plant maintenance) or by remote monitoring with increased safety or process improvement.  The best robotic applications are jobs with the three ‘D’s – dirty, dull and dangerous.