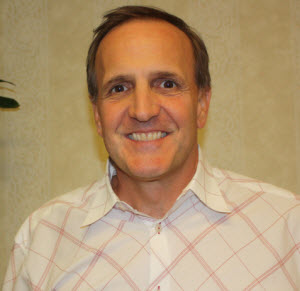 Qualcomm has formed a new incubator to launch next-generation mobile services and applications. Today, it unveiled four such startups at a press event in Palo Alto, Calif.

San Diego, Calif.-based Qualcomm is one of the world’s biggest tech companies with more than 16,000 employees. To spur more entrepreneurship internally, the company is forming the incubator so it can invest millions of dollars in cool ideas, wherever they come from, Babbs said. Qualcomm spends $2 billion a year on research and development, but the new incubator, formed last November, has just seven different projects underway (only four were announced).

The areas of focus will be communication, information and entertainment, discovery (including personalized and context-aware recommendations), life automation (using digital technology to simplify your life and relieve daily hassles), and digital to physical, or accessing relevant digital information to enhance your mobile interactions. All of those areas are expected to be revolutionized by the arrival of powerful new mobile devices and high-speed networks that support them, Babbs said. Investments range from$1 million to $4 million and will come in phases.

The incubator’s goal is to move fast and transfer the services or products to new or existing Qualcomm divisions as they mature. Qualcomm Services Labs will focus on internal startups, while Qualcomm Ventures will invest in external companies.

“We’re looking for big market opportunities, like $3 billion to $5 billion markets in three to five years,” Babbs said. “And we’re looking for a unique Qualcomm differentiation.”

The services will definitely focus on apps and direct-to-consumer businesses, which is not Qualcomm’s typical area of investment. The goal is to work with small, agile teams. Here’s a rundown on the first four services unveiled today: 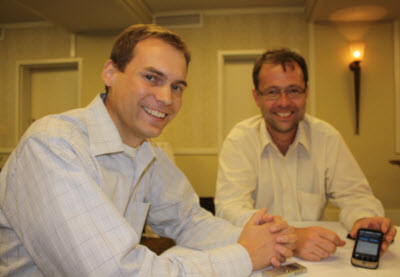 Neer is a geo-fence location-sharing service. Geo-fencing refers to a user’s ability to create a virtual perimeter around a real-world location. In this case, you can isolate places such as Home, Work, or Watering Hole and designate which friends can discover you in those locations.

It’s the brainchild of Ian Heidt (left) and Eric Bilange (right). You can use Neer to rope off a place and let your inner circle of friends or family find you there. Heidt, for instance, shares his work location with his wife. When he leaves work, his phone disappears from that location and Neer marks that he has left work. His wife can glance at her phone and see that Heidt has left his work and is probably driving home. She doesn’t have to call him to ask if he’s on his way.

Heidt doesn’t have to share every single location with his wife, since that would be awkward in terms of privacy and because it would tax the location technology on his phone — and probably drain its battery power. You can also use Neer to set boundaries. For instance, you can allow co-workers to see that you are at work. They can tap on your image and give you a call. But after work hours, they won’t be able to discover your location. The app is available on Android Market (where it has been downloaded more than 10,000 times) and is coming soon to Brew MP and Apple’s App Store. 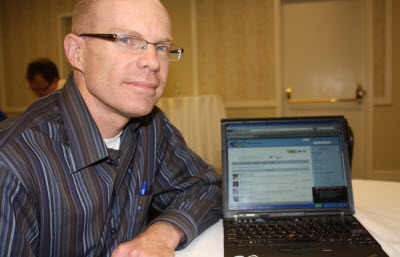 Qilroy is a peer-to-place communication service that can help you discover who has declared publicly that they are in your vicinity or a vicinity that you are interested in. It’s named after the “Kilroy was here” graffiti message from World War II, that soldiers used to signal the advance of the American presence throughout the war’s locations.

You can use Qilroy from a phone or a PC to search for people to talk with. If you enter your location, Qilroy will collect all of the Twitter messages and Twitter photos that have been posted near you. You can then click on one of the messages and initiate a chat session with its author.

You can also enter a location such as AT&T Park in San Francisco. Qilroy will collect the messages of all of the people that are tweeting from that location. If you’re a San Francisco Giants fan, you can pick a fight with a Cincinnati Reds fans, said Mike Bailey, (pictured above), the creator of the service. You can look up topics as well, such as “things to do in Las Vegas” or see who is publicly tweeting at your university. Basically, you can find things that are relevant to you, are nearby, and are happening in real time.

“It’s great for delivering the ‘vibe’ of an area, like the excitement at a stadium,” Bailey said. You can also use it to see photos of lunches that people are eating around you and thereby find a restaurant to eat at. The app is available on Apple’s App Store and on the web at www.qilroy.com. 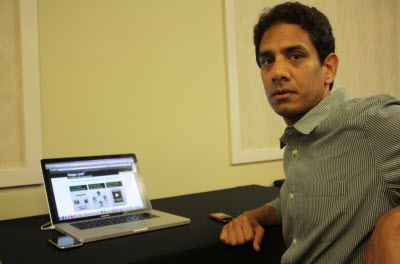 Tapioca is a URL-shortening service that Qualcomm recently acquired. The creation of Sachin Deshpande and his team of eight, Tapioca’s Magic Link service allows content creators to share multimedia (video, web sites, music) across different mobile devices without worrying whether they will work properly on any given device.

For instance, Adobe Flash videos and software are popular across the web, but they won’t play on Apple’s iPad or iPhone devices. So when someone shares a link with you, and you click on it, Tapioca will intercede. It will determine which device you have and then direct you to the proper site that is compatible with our device. If you have an Apple device, the Magic Link might direct you to a web site with a QuickTime video. It’s available today. Tapioca had raised $5.5 million from Venrock and was purchased for an undisclosed price. It was founded in 2007. 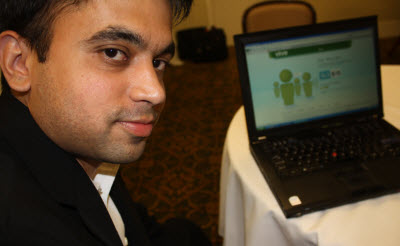 Last but not least, Qualcomm showed off Vive, a free friends-based social recommendation service. It allows users to share recommendations, ratings, purchases and other activities with friends in the Vive community. That community can communicate with each other and share apps, regardless of what mobile device any given person is using.

It is, in essence, a way to help friends communicate across walled gardens. Kabir Kasargod (right), who was one of the runner-ups in a Qualcomm internal startup contest, said that a users can start at a Vive Facebook app, which is linked to the user’s Facebook friends.

The first thing you do is describe what kind of mobile device you use. You can then browse through your friends’ apps and see the ratings and reviews. You can browse through different app stores from the Vive page. If you find one you like, a link will appear in the lower right corner that says “get it,” but only if that app is available on your particular phone or its app store. Once you click on the link, your phone will present the purchase screen for the app. You can then purchase the app, which will download to your phone.

Vive thus gives users the freedom to recommend any content to users who aren’t on the exact same platform. Users can also get rewards for being active or influential. That, in turn, will inspire the users to be even more active. It’s available today on Facebook and is coming soon to Brew MP and Apple’s App Store. Kasargod came up with the idea a couple of years ago and has been running with it ever since. It’s been live for about six weeks.

Vive is exactly the kind of app we are seeking out for DiscoveryBeat 2010, our conference about how to get your content noticed. It will take place in San Francisco on Oct. 18 at the Mission Bay conference center.