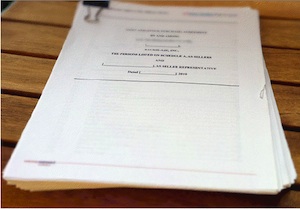 Backblaze, a startup that offers an easy way for users to continuously back up their hard drive, is making a rather unusual announcement on its blog this morning — that it was almost acquired.

Cofounder and chief executive Gleb Budman writes that Backblaze accepted an offer from a larger company and everything was just days away from being finalized, before the deal fell through. It may seem rather strange for a startup to write about a deal that ultimately didn’t happen, but Budman says Backblaze is an open company by nature (for example it published the designs for its storage infrastructure last year, so that anyone could use them), and that he wanted to shed some light on the process.

Who was the acquirer? Not surprisingly, Budman isn’t saying. Backblaze was first approached by a large company that he calls Spacely Sprockets Software, and after some discussion, the offer fell into the “OK but not thrilling” category. So Backblaze went looking for another buyer and got a second offer from a company Budman calls Cogswell’s Cosmic Cogs.

More negotiations ensued, and finally Backblaze decided to accept an offer from Cogswell’s. The price is another thing that Budman isn’t identifying, but he told VentureBeat via email that “this was large enough that even the most junior employee would have been purchasing a house in SF.” The startup signed the offer, the due diligence process began … and then it fell apart.

Right after the end of the diligence period, Cogswell’s CEO reportedly called Budman and said his board of directors wouldn’t accept the deal without some restructuring. Namely, they wanted to move money from the upfront payment to the earnout period after the acquisition, to help ensure Backblaze executives wouldn’t leave right away. Backblaze decided that wasn’t acceptable, so there was no deal, and the startup will be going it alone for now. That’s okay, Budman says, since Backblaze is profitable and has plans for “hypergrowth.” And it hasn’t raised any venture capital, so there’s no pressure from VCs to sell.

Budman identifies a few key lessons from the experience: