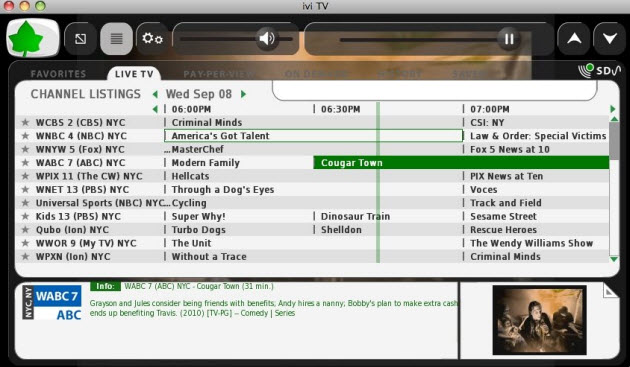 Ivi is announcing today it will offer a PC-based live TV service on the web.

The Seattle-based company is launching a downloadable PC application that takes a live feed from TV channels and distributes that stream, uninterrupted and without delays, to viewers worldwide 24 hours a day. Ivi is offering a 30-day free trial for the service to watch major broadcast channels including ABC, NBC, CBS, Fox, The CW, PBS and other local affiliates.

The Ivi TV player transforms a computer into a television with multiple channel offerings. Users can select the channel by using a simple channel guide. The TV player can be downloaded to any Windows, Mac, or Linux computer. It will soon be available on platforms such as mobile devices, tablets and set-top boxes.

The company claims Ivi will make set-top boxes obsolete by allowing viewers to watch their TV shows anywhere, on any PC where they download the application. Todd Weaver started Ivi in 2007. He serves as chief executive.

One of the features that consumers have long wanted is a la carte TV channels. Most of the time, consumers may want only one or two channels. But they have to subscribe to a whole bundle of channels in order to get what they want. Ivi says it can enable such a la carte service.

The basic Ivi Air package contains over 25 major broadcast channels for $4.99 a month, after the 30-day free trial. More channels will be added each month for no additional costs. If you want time shifting, or digital video recording that allows you to watch a show whenever you want, you pay 99 cents a a month more.

Ivi hopes to create a bigger hole in the cable TV industry, which is losing lots of subscribers. Market researcher SNL Kagan reported that the cable TV companies lost 711,000 subscribers in the second quarter of 2010. Yankee Group said that pay-TV revenues are starting to decrease, partly due to rising cable service rates. Ivi claims that it has legal rights to run TV shows on the web and it will be paying royalties to copyright holders.

Ivi’s service does not require buffering, or a delay which occurs as a video downloads to a user’s system. You can watch the Ivi shows in any quality level you want. You can watch local content anywhere in the world. You can view New York City broadcast channels wherever you are. The company is one among many companies that are promising to disrupt the TV business. Others include Apple with Apple TV, Google with Google TV, Samsung with its TV apps, and Logitech with its upcoming Google TV set-top box.