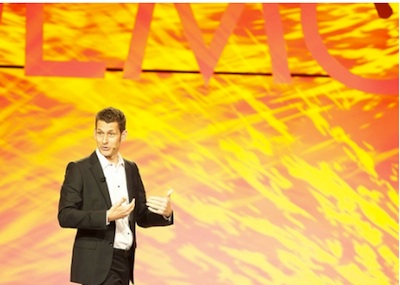 DEMO Executive Producer and VentureBeat Editor in Chief Matt Marshall got the technology launchpad conference started this morning with a speech looking at some of the big trends behind the more than 60 companies demonstrating over the next two days.

Matt began his speech by recounting a date he had last week. Apparently, his girlfriend whipped out her phone, showed him her farm on a game that Matt recognized as “possibly being FarmVille.” (It wasn’t FarmVille. Matt is plugged into the startup scene, but he doesn’t exactly spend a lot of time gaming.) After the date, he went home, set up a FarmVille farm, and was soon sending pigs to an editor of a competing tech blog, who promptly returned the favor by mocking him on Facebook.

What was his point? Is social gaming going to be a big focus at DEMO Fall 2010? Not exactly. Matt said the incident drove home how a startup like FarmVille-maker Zynga can insinuate itself into our daily lives: “This industry has sprouted up from nothing,” he said.

So Matt identified three more industries that are going to come up a lot at the conference — new uses of social networking technology, such as e-commerce with a social twist; mobile advertising and technology; and cloud computing. These industries aren’t exactly starting from nothing right now, but they are growing “just as quickly,” and at DEMO we’ll be highlighting companies that represent the next evolution in those technologies.

“These trends have created the perfect fire hazard conditions for industries to be ignited,” Matt said, later adding, “This stuff is coming down your tailpipe, whatever industry you’re in.”